Bringing “The Transformation” to Trafficked Girls in LA; An Interview with Toni Bankston, LCSW [Part 1]

James S. Gordon (Interviewer, author of this blog, and author of The Transformation: Discovering Wholeness and Healing After Trauma) is the Founder and Executive Director of The Center for Mind-Body Medicine. He is a Harvard-educated psychiatrist, a former researcher at the National Institute of Mental Health and Chair of the White House Commission on Complementary and Alternative Medicine Policy, and a clinical professor of Psychiatry and Family Medicine at Georgetown Medical School. 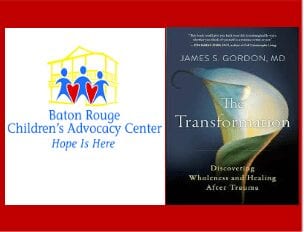 Toni Bankston is a clinical social worker. She is Executive Director of the Baton Rouge Children’s Advocacy Center (CAC) and this year’s “Louisiana Social Worker of the Year.” Toni is a long-time Center for Mind-Body Medicine faculty member who has, over the last seven years, developed a groundbreaking program for trafficked girls in Baton Rouge, Louisiana. I did this interview with Toni in Culebra, Puerto Rico, where CMBM was training Puerto Rican clinicians, educators, and community leaders who are meeting the challenges of population-wide trauma in the aftermath of hurricanes and this year’s political upheaval.

Part 1 of 3 of this interview transcript:

Jim:  I’m glad we have some time to catch up, Toni. I wanted to ask you to give people who are working with children and adults who’ve been trafficked a feeling for how you and your colleagues at CAC are using the model that’s in The Transformation to work with trafficked girls.

Toni: There are lots of similarities in the way we use the approach in The Transformation with trafficked girls with the other abused kids in our program. Still, we’ve tailored the approach so that it works best for them.  We’ve made it available in shelters and also in homes where the victims go after they’ve been rescued from their traffickers.

One of the residential homes that we work with serves the entire state. It’s well-structured so we’re able to use the entire 12-session mind-body skills group model you describe. We also provide groups to boys, as well as girls, who are still living on the street.

Jim: How do the kids get to the home?

Toni: These kids have been living with or under the control of the trafficker – we call them “pimps.” He gets arrested and the survivors need a place to live because while the trafficker was controlling them and abusing them, they were also their primary caregiver. Some of these guys are “Gorilla” pimps – and can be quite brutal physically. Others are what we call “Romeo” pimps, who groom and charm the girls – offering them everything they need.

Baton Rouge is not a huge city; however, it’s one of the “hot spots” for trafficking because we’re located on the I-10/I-12 corridor that runs from Texas through Shreveport, Baton Rouge, and New Orleans. Each year, for the last 7 years, we’ve worked with about 30 trafficking victims who live in homes. And we’ve reached out to many more on the street.

Jim: You say it’s a challenge to work with these young people – why?

Toni: One of the things with trafficking survivors is while it’s horrible exploitation, and abusive, many of the young girls  – and the guys too – have more perks, more independence, than they ever had before. In some ways, the pimp also helps them feel in control of their sexuality.

When they first come into our mind-body groups, they might say “I wasn’t abused, this was my boyfriend. He was nicer to me than any person I ever knew in my entire life. I’ve been in and out of foster homes.” So, they often don’t see themselves as victims. At least in the beginning.

They don’t want to be preached at or told what to do by anyone, except their pimp. And, they definitely don’t want to be “fixed”. One of the reasons I think that they like our groups is we’re not telling them what to do, or that what they’ve been doing is wrong, or forcing them to talk about what’s happened. From the beginning of our groups, we ask them what they want to focus on, what do they see as their biggest problem, it’s a delicate process and one of the great things about The Transformation’s model is we’re not pushing, we’re not forcing. And unlike many of the cognitive models we’ve used, it feels empowering. It gives them a different way to feel in control than “I’m going to go on the street and make money.”

Jim: How does the group unfold?

Toni: Well, we begin with the “ground rules”, which of course include confidentiality, speaking in turn, and not having to speak if you don’t want to, beginning and ending on time, and making sure they know that there’s going to be a whole series of groups so the girls feel more secure with this structure, and at the same time, not pressured. When we go around in the first group and do a “check-in” they begin to realize they have a voice. Maybe it’s the first time in their life that they’ve felt able to speak for themselves, and that other people are listening and nobody is interrupting, shouting at them, or telling them what to do.

In the beginning, most of them don’t want to talk about the trafficking. They have years of shame, embarrassment, which made them vulnerable to the trafficking in the first place. In the Mind-Body Skills Groups, they experience a level of respect from the leaders and their peers, they feel safe, and that safety is really crucial.

Jim: I agree with you totally about the importance of safety and “having a voice.” But, what about the techniques? How is this approach different from others that you’ve used, or that the girls have experienced?

Toni: One of the key things that mind-body skills do is help the trafficking survivors to restore or develop some self-regulation. They come to us very dysregulated. What I mean by that is they’re quite impulsive, have frequent temper tantrums, and engage in self-harming behavior that they learned many years ago as ways of coping and feeling better. They abuse substances.

Rather than say “don’t do that anymore”, what we do is offer them a toolkit that helps them to balance out their bodies, to quiet the ‘fight-or-flight’ response, to react a little less and respond a little more. Right at the beginning, we teach the “Soft Belly” breathing that you describe in The Transformation. Slow, deep breathing. As they learn to do it regularly, it creates a moment, a pause, a peaceful feeling in their minds and bodies. After not too long, they stop immediately yelling at whoever is in charge (and losing their privileges). It gives them a sense of control of their bodies and their feelings – a first.

Jim: So Soft Belly puts them in a kind of physiological balance and they’re a little less reactive a little calmer. What do the girls say when they experience Soft Belly?

Toni: In the first group it’s a mix. Many have a hard time settling down because these girls have been so traumatized and they’re hyperactive, so it’s a challenge in the first group. But we repeat it, over and over again. And when they have that moment where it finally begins to click, and they are able to breathe deeply and soften and quiet down and relax- it’s quite amazing. They talk about being able to deal with emotions when they come up, rather than being completely overwhelmed by them. After Soft Belly they talk about what’s happened, the other girls are able to hear and nod their heads – and that helps to build community.

Come back soon to read the next two parts of this interview transcript.