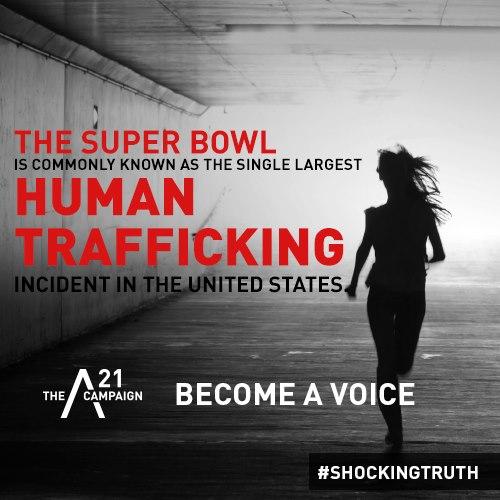 In early 2011 the Texas Attorney General shocked the public by announcing that the Super Bowl is the single largest human trafficking incident in the United States. As tourism increases in the cities where the Super Bowl is held so does sex tourism. Traffickers travel to large public sporting events across the country to sell young women and girls in the lucrative sex industry. By advertising online ahead of time, the traffickers are able to let potential buyers know the location and time that the girls and women will be available for sex. The Attorney General’s shocking statement has proven to be correct as there have been human trafficking arrests every year at the Super Bowl for the past five years.

ECPAT-USA trained all Jersey City hotels on how to identify victims of human trafficking and S.O.A.P (Save Our Adolescent from Prostitution) has mobilized and raised money to give out bars of soap to tourists with the national human trafficking hotline number printed on them. Even local student groups like Not on Our Turf have organized to increase awareness of the connection between human trafficking and the Super Bowl. New Jersey will be the first host of the Super Bowl to tackle the issue of sex trafficking so thoroughly by passing new laws, holding trainings and public awareness campaigns. In a couple short weeks we will find out if all their hard work is enough to curb the demand of the sex industry.