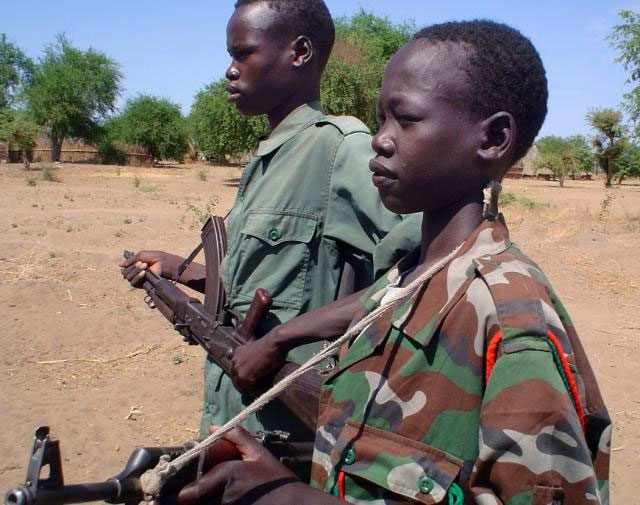 Government / Rebel Groups
During times of armed conflict women and children are often abducted and enslaved by government or rebel forces. This is a diverse phenomenon that has been connected to conflicts in almost all regions of the world. In the Middle East the Islamic State has kidnapped and sexually exploited thousands of Yazidi women and children. Many of the Yazidi women were forcibly married to their captors or repeatedly sold to Islamic State fighters. In Southeast Asia, Rohingya Muslim women, men, and children fleeing communal violence in Myanmar have been routinely trapped on boats and trafficked to Thailand. In Africa, the ongoing civil war in the Central African Republic (CAR) includes over 6,000 child soldiers. In South Sudan the situation is even more dire—an estimated 16,000 children have been recruited into forced labor by armed groups. During conflicts such as these, it is also not uncommon for people to be bought, sold, or traded in exchange for weapons.

Internally Displaced Persons (IDP)
There are currently 65.3 million forcibly displaced people worldwide—the highest level of displacement on record. Displaced persons face violence, poverty, isolation from family, and the absence of law enforcement. At its core, human trafficking is the exploitation of the vulnerable and IDPs are some of the world’s most vulnerable people. Renewed conflict in Myanmar and Afghanistan has led to large scale displacement and increased the risk of human trafficking. The International Organization for Migration interviewed refugees in Italy, who had traveled along the Central Mediterranean Route connecting North Africa to Europe. They found that 76 percent of respondents answered positively to at least one of the trafficking and other exploitative practices indicators based on their own direct experience during their journey, including: having worked or performed activities without getting the payment they expected; being forced to perform work or other activities against their will; being approached by someone offering employment; being approached by someone offering to arrange a marriage; and, being held at a location against their will by parties other than any relevant governmental authorities.

Military Contractors / Supply Chains
Third country nationals or TCNs as they are commonly known in the military community, have been continually trafficked into Iraq and Afghanistan to support the US military missions in the area. The US military sub-contracts the majority of its non-military labor needs through outside agencies which in turn sub-contracts out to a third or even fourth company. Foreign workers are commonly brought to US military bases to work as cleaners, cooks, fast-food employees, beauticians, and construction workers. The majority of workers are from low-income countries like Fiji, the Philippines, Nepal, Ukraine, and Bulgaria and are looking for better economic opportunities. But the recruiters charge exorbitant fees, putting the individuals at risk of debt bondage and trafficking. In 2012, President Obama issued an executive order asserting a zero tolerance policy for government contractors who violate human trafficking laws—yet with little domestic or international oversight into the military supply chain little has changed.

Trafficking in Post Conflict Situations
Women who have already been victims of sexual exploitation and violence during the war are at a particularly high risk to become victims to post-war trafficking, because they are often socially isolated and economically extremely vulnerable. With the presence of foreign or international military or civilian forces, post-conflict zones often become areas of destination for trafficking in women. Foreign troops and Peacekeepers usually bring a demand for sexual services and domestic labor. United Nations Peacekeepers have been accused of raping the local women in conflict from as far back as Bosnia and Kosovo and as recent as the current conflict in the Central African Republic. Once the market is created by foreigners, locals, such as ex-combatants and loitering militias often step in to continue the sexual exploitation of local women and children.

Michelle Lillie is Director of Operations at Human Trafficking Search.