Turkey: A report on the scale, scope and context of the sexual exploitation of children

Domestic instability, the influx of millions of refugees and Turkey’s geographic position have resulted in Turkish children and foreign refugee children being vulnerable to child sexual exploitation in Turkey. The failed military coup d’état in 2016, and the two-year state of emergency that followed, have strained relationships between the government and civil society, with the operations of civil society organisations, including those working on human rights issues, being limited.

Coupled with domestic instability, Turkey has been at the centre of an enormous refugee crisis, receiving and hosting more refugees than any other country in the world, which the country and the government must be commended for. However, millions of refugees live in vulnerable circumstances in Turkey leaving thousands of children at risk of sexual exploitation. Vulnerability is aggravated by limited economic opportunities and extreme poverty. However, the issue of child poverty is not limited to the refugee population, with the poverty rate for Turkish households that include at least one child being as high as 22.6%.

Turkey’s geographic position bordering the Middle East, Eastern Europe and Southern Europe, creates the perception that it is a ‘bridge’ between Asia and Europe and makes it an arterial route for migrants. With this comes the issue of becoming a transit, destination and origin country for human trafficking, including of children for the purposes of sexual exploitation. Reports described in this overview highlight the phenomenon of children from states bordering Turkey – such as Iraq and Syria – being trafficked and sold for the purposes of child sexual exploitation. The issue of child, early and forced marriages, has been shown to impact thousands of Syrian refugee children and Turkish children. The Turkish government’s response to the issue has been limited and criticised by a number of reports. Government data, consulted in this country overview, indicates that the issue remains prevalent. 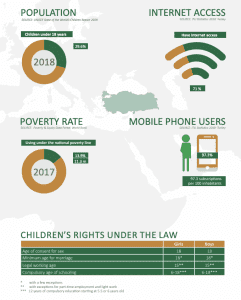