Iraq: A report on the scale, scope and context of the sexual exploitation of children

Iraq has a total population of more than 37 million, of which 47% are children. Years of conflict, including insurgency from the militant group Da’esh (also known as ISIL) and hosting up to 250,00 refugees from neighbouring Syria, have exacerbated the range of risks that children face, including to sexual exploitation.

Boys and girls from persecuted groups have faced high levels of sexual violence and exploitation either through recruitment into ISIL forces or through sexual enslavement by its members. Other children resorted to survival sex in desperation to escape the environment of violence and abuse and the lack of livelihood opportunities. Poverty and extremely limited opportunities force people, including boys and girls into exploitative conditions in order to survive or provide for their families. Boys have reported being required to provide sexual services to receive their wages in some working conditions. Girls escaping violence, abuse, forced marriages or so-called ‘honour killings’ are exploited by recruiters. Details of elaborate systems established for trafficking women and girls have been reported in areas previously controlled by ISIL.

National law enforcement and protection systems are stretched beyond breaking point, which has led to situations that allow child sex offenders to abuse with impunity. Instances of sexual exploitation of children through prostitution have been reportedly protected by complicit police and security forces. Instances of IDP and refugee At a Glance camp administrators have also been exposed as demanding sex, including with children, for food.

Sharp increases in access to technology see 80% of 15-year olds having access to a mobile phone, with many also online via these devices. Risks are increased from the big generational gap in Internet use meaning parents are unaware of the risks to online sexual exploitation that children face. Cases of sexual extortion where perpetrators threaten to expose private images have been reported that can lead to ongoing instances of sexual exploitation or even trafficking.

Since the retreat of ISIL forces in 2017, tourism has surged, particularly in the more stable Kurdistan Region of Iraq region, with tourist numbers hitting 1.3 million within the first half of 2018. As tourism grows, so may sexual exploitation of children in this context.

While the legal age for marriage is 18, many marriages are conducted outside the formal legal system without registration, meaning child marriage rates are likely to be higher than the roughly 24% of girls that has been reported. Child marriage can be viewed as a protection mechanism. For example, it was used to prevent girls being married to men associated with ISIL, or families in poverty benefit from bride price. Fasliya marriages (gifting a female to another tribe through marriage) are also practiced in some areas, particularly the south of the country 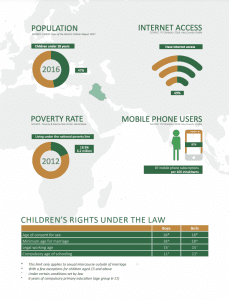