Illustrative — Demonstrator at a protest march against the Russian invasion of Ukraine, in Tel Aviv, on February 26, 2022 (Tomer Neuberg/Flash90)

Israel authorities are investigating the circumstances of a Ukrainian refugee teenager, who arrived in the country with a family who are not her relatives, amid fears that it may be an incident of trafficking.

A meeting of the Justice Ministry’s legal aid department on Wednesday decided to urgently provide support for the girl, Haaretz reported Thursday. The newspaper was the first to report the case.

A legal representative for the family told The Times of Israel that though there is a tangle of paperwork regarding the 17-year-old girl, he claimed that there is no question that she has been placed in the care of the family, and that there is nothing illegal about her arrival.

When the family arrived earlier this month, the father told border officials that his wife had adopted the girl as an orphan in Ukraine, but Population, Immigration and Border Authority officials noticed contradictions in his account and got the impression that the girl was not tied to the family, according to the report.

Idan Moldavski, the attorney representing the family, explained that the girl arrived in Israel with the family, which is not eligible for citizenship, on March 22 and that the father has a work permit till the end of December.

However, during their interviews at Ben Gurion Airport, an Interior Ministry interpreter was “hostile” to the family and mistranslated some of the things that were said, the lawyer claimed.

The girl’s past is complicated, and she was apparently formally adopted by the mother of the man’s wife, the lawyer said.

The grandparents had signed paperwork appointing the mother as her formal guardian. Those papers, in Ukrainian, have been backed up by the Ukrainian consul in Israel, according to Moldavski.

But Israeli authorities have so far not recognized the mother as the girl’s legal guardian, nor her appointment of Moldavski as the legal representative of the girl.

In the meantime, the family is being kept in a holding area at Ben Gurion Airport, and have been separated from the father, Moldavski said.

He confirmed that a representative from legal aid had met with the girl the day before.

Lawyers on behalf of the family and state are to submit their arguments to an appeals court later in the day.

An appeals court has already ruled the family should remain in the country until any further decisions are made on the matter and the Israel Police people-trafficking unit should question the girl, Haaretz reported.

Labor MK Ibtisam Mara’ana, who has relentlessly campaigned for an improvement in the treatment of Ukrainian refugees, said in a Facebook post that there were “difficult questions” about the girl’s status.

“Who are her biological parents? Did they even agree that she should come here? Maybe she was abducted? Maybe there is trafficking here? Maybe if the girl stays in Israel she will be exposed to exploitation? Who will protect her?” Mara’ana wrote in a Facebook post. “I do not judge the Population Authority on its decision to temporarily block their entry into the country.” 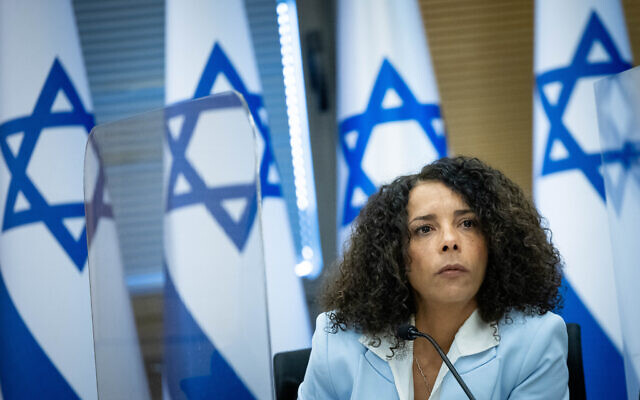 Ibtisam Mara’ana at the Knesset, the Israeli Parliament in Jerusalem on December 7, 2021 (Yonatan Sindel/Flash90)

Earlier this month, the Task Force on Human Trafficking and Prostitution, an Israeli organization, warned of the dangers to women escaping the fighting in Ukraine.

Director Or Abu told the Ynet website that “Israel needs to do ensure the absorption of refugees is in a way that reduces this harm.”

She called for enabling arrivals to have access to welfare and health services and work permits enabling them to earn a living.

Meanwhile, the Justice Ministry’s legal aid unit is pushing to be permitted to represent Ukrainian refugee minors who arrive unaccompanied by adults after a number of incidents in which such arrivals were dealt with by Israel authorities without adult representation.

Providing the legal aid is dependent on the approval of the Justice Ministry director-general, the Haaretz report said.

At a Wednesday meeting of the Knesset special committee for foreign workers, a Justice Ministry representative asked the Population, Immigration, and Border Control Authority to clarify its position on the matter. PIBA representatives said it was not aware of any cases of minors arriving alone and not being appointed a legal representative.

However, Haaretz reported that there had been at least three such cases recently.

In one case, an boy, 14, and his sister, 18, were denied entry after arriving in the country. Their mother has been in Israel for five and a half years, the last two months of which were an illegal stay.

An appeal against their entry ban was rejected without taking into consideration that they did not have adult representation during proceedings, according to the report.

In another case, a minor was questioned on her arrival even though her mother is working legally in Israel, without having an adult representative present. She was later deported to Budapest before a decision was made on an appeal against her entry ban.

An appeals court later ruled that PIBA’s decision to remove her was unreasonable and that the girl can return to Israel if a bond is given. The court also ruled that procedures should be drawn up as soon as possible relating to the questioning of unaccompanied minors at Ben Gurion Airport when they arrive, in accordance with the law and international agreements that Israel is signed on to.

In a third case, a 15-year-old boy was interviewed by PIBA after arriving unaccompanied from Ukraine. He was also initially denied entry until an appeal was filed on his behalf. The boy was allowed entry after a financial guarantee was deposited. 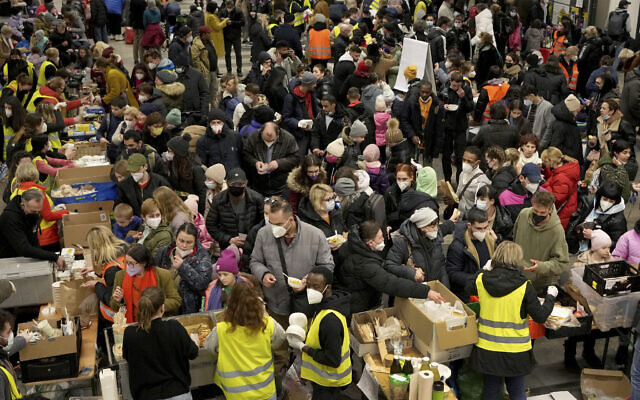 Ukrainian refugees line up for food at the welcome area after their arrival at the main train station in Berlin, Germany, March 8, 2022. (AP Photo/Michael Sohn, File)

The plight of unaccompanied Ukrainian refugees has been gaining attention in the international community.

The European Union announced moves on Wednesday to help its member states assist the millions of refugees fleeing Russia’s war on Ukraine in accessing schools for their children, healthcare, accommodation and work.

Johansson said the measures will include establishing procedures for safely transporting unaccompanied children, amid signs that criminals could already be preying on them and on other refugees.

“Unfortunately, we have some signs of cars waiting to pick people up — women and children, vulnerable people,” she said. “We have some indications on online services that the demand for Ukrainian women for sexual purposes has gone up. And we know that Ukrainians were in the top five citizens for trafficking human beings already before the war, so this is a huge risk.”

The United Nations says more than 3.5 million people — mainly women and children — have fled Ukraine in the month since Russian tanks rolled across the border and Moscow began relentlessly bombarding towns and cities.

As millions of people flee the raging conflict in Ukraine, aid workers are scrambling to ensure human traffickers do not take advantage of the chaos, a top UN official said earlier this month.

With many able-bodied men remaining in Ukraine to fight the Russian forces since they launched their full-scale invasion a month ago, women, children and the elderly make up the vast majority of those who have fled the country.

Final Report Women Worker in Unorganized Sector, Himalayan
It's Time to Talk: Children's Views on Children's Work
Made on the Inside, Worn on the Outside
The products you buy in Australia could be linked to modern slavery