During a recent webinar as a part of its Now & Next Speaker Series, World Without Exploitation (WorldWE) invited Tamar Arenson and Megan Lundstrom to discuss the “Bitter Truth of Sugaring” and the dangers of being a sugar baby. Both Megan and Tamar agreed that, while sugaring is packaged as a consenting relationship with some level of companionship, the reality is that it is similar to prostitution.

You can watch the full webinar here.

A brief Google search offers myriad opinions regarding what a “sugar baby” is, but most are close to or versions of the following definition: “A sugar baby is a person who receives cash, gifts or other financial and material benefits in exchange for company. It can include sex or intimacy, but it doesn’t have to.”

Framed like that, being a sugar baby is made to seem harmless and almost fun. Unfortunately, Seeking Arrangements (featured on the National Center on Sexual Exploitation’s 2020 Dirty Dozen List) and other such websites are all attempting to hide the darker side of sugaring. For all intents and purpose, when the facade is stripped away, what is framed as a form of online dating meant to cultivate consenting relationships between two individuals is revealed as actually being a disturbing form of sexual exploitation.

The dictionary defines prostitution as “the practice or occupation of engaging in sexual activity with someone for payment.” Comparing the two definitions, it becomes more difficult to see the differences between the definition of a sugar baby and that of a prostituted person. 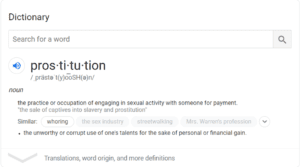 The industry tries to sell the idea that sugaring not a form of prostitution, but is instead a way of being both “empowered” and “pampered.”

But the truth is more nuanced and troubling than that.

In the WorldWE webinar, Arenson explained that the industry of sugaring preys on the financial discrepancies in educational institutions as well as problems in our current student casual-spending culture. In 2018, the average student debt load for a bachelor’s degree was $29,000 compared to an average debt of $22,300 in 2010; with The Urban Institute reporting that “Outstanding student loan debt increased by 70% between 2008 and 2013—only half the rate of growth over the first half of the decade.” So, it makes sense that, as college students become more and more burdened regarding their finances, sugaring can be positioned as an easy and attractive solution.

If you closely examine the Seeking Arrangements website, it becomes apparent that it is marketed towards college students. In fact, if you go to sign up for an account with Seeking Arrangements, it offers a free upgrade for individuals who sign up using a .edu email address. 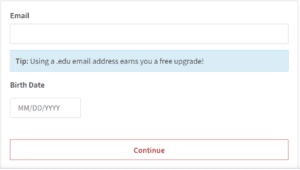 From there, no one has to squint to see how and why financially vulnerable individuals, women in particular, who frequently must choose between paying rent and feeding themselves for the month are increasingly susceptible to exploitation of this nature. In the midst of this completely and intentionally imbalanced power arrangement, many “sugar daddies” offering financial aid find it easy to coerce their dates into providing sex. What once was marketed as a “fun arrangement” can and does quickly turn into a “you owe me” situation. When and where it does, there can be no more delusion about this being a “consensual relationship.”

Worse yet, Lundstrom explained that there can be three parties involved in these troubling “arrangements”: the economically vulnerable sugar baby, her sugar daddy, and a third-party trafficker that acts behind the scenes. A former sugar baby herself, Lundstrom expanded on that reality by explaining how, for sex trafficked or pimp-controlled individuals, there truly was/is no difference between a website like Backpage and Seeking Arrangements. All that matters is the quota you were required to meet and the money you had to earn. This reality only further solidifies the link between sugaring and prostitution.

It is crucial to connect these dots. When we take a step back and examine different forms of sexual exploitation, it becomes clear that they are all interconnected. For example, sugaring can and does involve sex trafficking and prostituted people. Additionally, studies have shown that sex buyers use “significantly more pornography than nonbuyers.” And an increase in instances of sexual harassment and sexual violence can be traced to violence in pornography.

So, with knowledge of the intersectionality involved, how can we begin to combat this specific form of exploitation? Both Lundstrom and Arenson offered several solutions. Lundstrom emphasized that more honest and nuanced conversations are needed to bring the harsh truths of sugaring to light. These types of conversations are vital for helping college students and young adults make more informed decisions about whether or not they should join websites like Seeking Arrangements.