The human trafficking industry is commonly associated with secrecy: operations occur underground, behind the scenes, hidden from the public eye. There is, however, at least one type of human trafficking in plain sight. The victims of forced child begging will interact with anyone whose path crosses theirs. 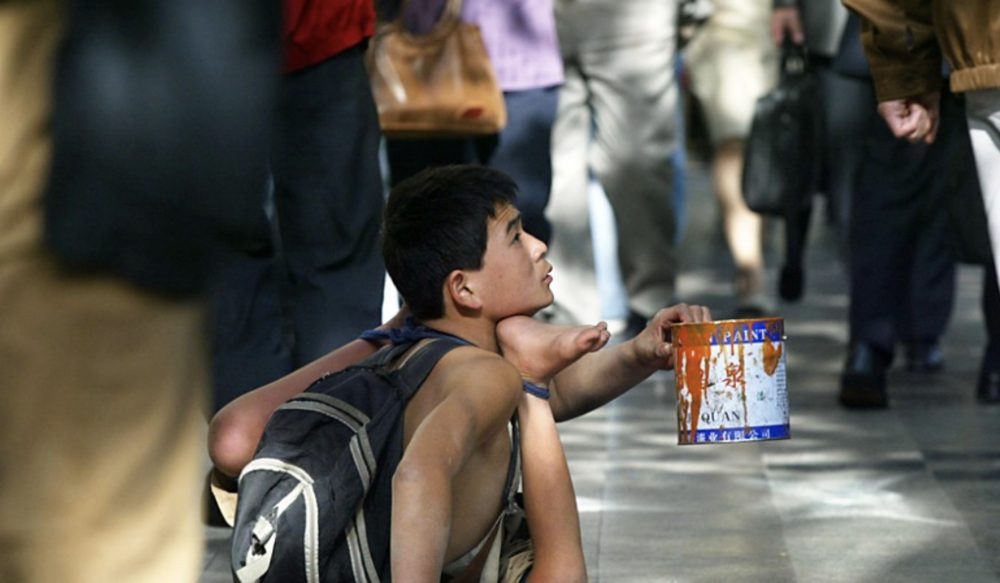 Be it on vacation or closer to home, many have experienced the discomfort deriving from being begged for money by small children. What is not always evident, however, is that many of these children have been coerced into their situation through intimidation, threats, and punishments. They are, therefore, victims of child labor trafficking – a prevalent form of human trafficking, currently affecting an estimated 168 million children worldwide. In fact, forced child begging is classified as one of the Worst Forms of Child Labor, and completely violates the basic human rights protection framework of the UN Convention on the Rights of the Child. It is also one of the most visible forms of human trafficking in existence: the exploited children are in plain sight, impossible to miss for any pedestrian walking by.

Money is the clear driving factor behind the existence of this type of trafficking, and, indeed, the practice can be lucrative. In 2005, in Schenzhen, China, a man could earn between $30,000 and $40,000 per year by forcing children to beg. Generally, children on the streets of Thailand will earn around 1000 Baht per day, or $30 – that is, if the child is handicapped. Studies have found that handicapped children bring in three times as much revenue as non-handicapped ones. This has lead to forced mutilations and amputations – the cutting off of legs, or the removal of eyes – with the goal of rendering the children more profitable.

Forced begging is an extremely widespread form of human trafficking, occurring in various forms across the globe – from Argentina, Algeria, and Thailand to Pakistan, Albania, and the United States. In Switzerland, for example, there have been numerous reports of Roma women trafficking children (and mentally disabled adults) from Romania to beg on Swiss streets. In Senegal, children are exploited closer to home. Senegalese children forced into begging, of which there are reportedly over 50,000, are commonly referred to as Talibés. In most cases, Talibés are young boys who have been sent to master the Quran at Quranic schools, only for their “spiritual leaders,” or marabout, to exploit the situation. The boys are given a quota to bring back every day, and if they don’t, they may be subjected to beatings, binding, and isolation. In India, large-scale human trafficking cartels control over 300,000 children, forcing them to beg, drugging them, and beating them.

As with all forms of human trafficking, the eradication of forced child begging will be difficult and complex – but necessary. Increased education is one of the essential steps towards the elimination of this form of trafficking: most victims of forced begging are denied access to schooling, which allows the traffickers to tighten their control. Moreover, we, as individuals, might feel morally compelled to give out coins when we are faced with child beggars. We shouldn’t. These coins are unlikely to be seen by the children ever again – ending instead in the pockets of a perpetuator of human trafficking.

Trafficking in Tribal Nations: the impact of sex trafficking on Native Americans
2016 Highlights in the Anti-Trafficking Movement
Child Forced Labor Part I: The Mining Industry
Rising Numbers of Unaccompanied Children Give Concern to Protection Mechanisms