U.S. legislation on human trafficking is critically flawed. Throughout the field, practitioners are increasingly focusing on culling demand, frequently through legal means, as the most effective strategy to stop all types human trafficking and forced labor. But when it comes to corporate demand for cheap goods and labor, including in the agricultural field, the current legislative structure is insufficient. To date, theories of corporate liability have been unable to hold corporations liable for the benefits they receive from human trafficking and forced labor. 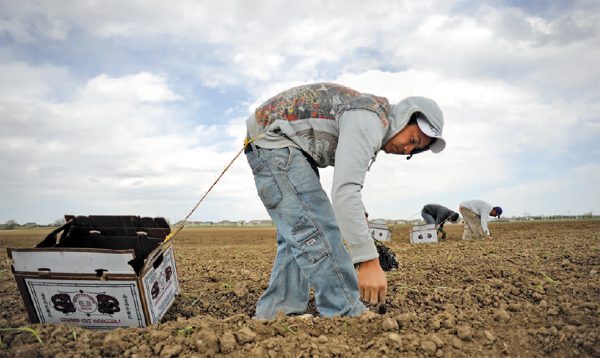 For example, in October 2004 agents with U.S. Immigration and Customs Enforcement discovered an farm work camp of forced laborers in northern Colorado. The camp was managed by Moises and Maria Rodriguez and their son, Javier Rodriguez. The family arranged to have the workers smuggled to Colorado from Mexico, and then held them in a fenced-in compound. On the compound the workers lived in squalor, with mold, broken floors, and walls with holes in them. The men were forced to pay a cleaning fee for a filthy bathhouse where red signs hung above the sinks warning that the water wasn’t safe to drink.

The son, Javier Rodriguez, lived in a nearby mobile home oversaw the men. He kept them in debt bondage, claiming they owed him between $1,100 to $1,300 each for the smuggling and monthly fees for their housing. He also charged them social security taxes but didn’t turn the money over to the government.

The men were victims of a larger subcontractor scheme. While their son managed the men, Maria Rodriguez kept the books and Moises Rodriguez, a well-known contractor to farm fields in northern Colorado, supplied the men to farmers who needed farm work done. Among the companies that benefited from the Rodriguez’s trafficked workers was Grant Family Farms, one of Colorado’s best known organic farms.

However when the case went to court and was adjudicated in 2009 it wasn’t possible to hold Grant Family Farms liable for benefitting from human trafficking. The Trafficking Victims Protection Act (TVPA) imposes no liability for willful blindness to such abuses. This makes it easier for companies to deflect liability to their subcontractors. As companies are not liable for the crimes of their subcontractors, and have no obligation to ensure abuse doesn’t exist in their supply chains, they can walk away from trafficking prosecutions virtually unaffected. This problem is especially concerning in agriculture, where the use of subcontractors is common and the work is widely unregulated. In their recent report, the Urban Institute confirms that such abuses perpetrated through the use of subcontractors persists in agriculture and beyond.

There are a variety of potential changes that could be made to the law in order to hold corporations liable for these crimes. The statute could be amended to include liability for those who are “willfully blind” to these crimes. An amendment could also clarify that corporations are “joint employers” with the subcontractors. Alternatively, more could be done to encourage corporations to remove human trafficking from their supply chains. For example, California took an initial step in this direction with the California Transparency in Supply Chains Act, which requires certain companies to report on their efforts to eradicate human trafficking and slavery from their supply chains.

Until such changes are made, in and outside of agriculture contractors will continue engaging in abusive practices in order to meet the corporate demand for cheap goods and labor.

Slave-free Holiday Shopping
Fast Fashion in Your Closet: What Your Clothes Say About Your Choices
BIPOC Trans Women and Girls: The Missing Narrative in Human Trafficking
State-sponsored Slavery: a North Korean Export