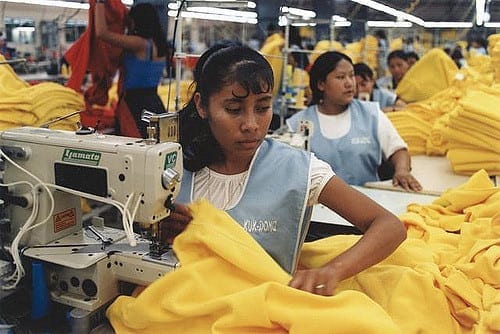 With the start of the new school year and the changing of seasons, U.S. retailers see sales jump this time of year. If you are participating in the back to school shopping season, make it a priority to think about your slavery footprint.

The fashion industry is one of the biggest offenders of modern day slavery. From picking cotton to sewing vests, clothes can be tainted at every step of production. While trafficking exists in a major way in the U.S., you should be particularly skeptical of cheap foreign-made clothes as many retailers will purposely outsource labor to countries with more relaxed labor laws and less government oversight.

If you want to lower your slavery footprint, start questioning where your clothes are coming from and buy from companies that are fair to workers and transparent about their supply chain. A wonderful way to ensure you are buying sustainably sourced clothing or other consumer goods is to buy Fair Trade Certified products. Another way to get those good deals we are all looking for without giving money to corporations (who may not be responsibly sourcing their labor) is to buy second hand!

The following guide begins with a list of the top-10 selling clothing retailers in the U.S. as well as the top 5 brands for teens in the U.S. with information on these companies’ slavery footprint. Then, there is a list of popular clothing and athletic wear brands that are good bets for sustainable shopping. Finally, you can find links to a large compilation of brands who make it their mission to actively work against human trafficking.

Nike- [Improving] Nike has had problems in the past with sweatshop labor, but they now have a site that provides excellent transparency about their supply chain.  You can view the interactive map here.

Forever 21- [Bad] Forever 21 allegedly purchases cotton from fields using forced child labor in Uzbekistan. They decided to move production to Asia (where there are fewer labor laws) after too many American employees were complaining about sweatshop-like conditions. There is a myriad of labor complaints against the company. [Source]

American Eagle– [Great!] A study that ranked brands by their compliance with the California Transparency in Supply Chains Act of 2010 (CA-TISCA) and transparency surrounding supply chain labor conditions ranked American Eagle as one of the best companies out of the nearly 2,000 brands evaluated. [Source]

Gap- [Good] In the same study referenced above, Gap also scored well (88%, compared to American Eagle’s 95%) They have pledged not to buy cotton from farms using forced child labor and continue to make improvements in their supply chain’s labor conditions. Gap has not always been this sustainable, there are reports as recently as 2010 of forced child labor in GAP factories. [Source]

Ralph Lauren– [Not Great] Although Ralph Lauren claims to be taking steps to eradicate human trafficking in its supply chain, in compliance with the CA-TISCA, upon further investigation Sustainalaytics finds they are far from a slavery-free supply chain.

Urban Outfitters- [Not Great] Urban Outfitters responded to the CA-TISCA by vowing not to use forced labor and promising audits by third-party institutions. There is, however, no evidence that these audits are happening, how often, or by who. There is altogether insufficient transparency on where their products are being made. Further, they are still allegedly using cotton picked by forced child labor. [Source]

Levi Strauss & Co – [good] Levi’s was the first U.S. retailer to ban the use of cotton from Uzbekistan (where there is government-sponsored forced child labor in cotton fields) They are active in bettering worker conditions.

Michael Kors -[Ok] Michael Kors has disclosed their supply chain in accordance with CA-TISCA and pledged not to use conflict minerals (often tied to modern slavery and child labor). They have also pledged not to buy cotton, tainted by forced child labor, from Uzbekistan. However, there have still been recent accusations of poor labor conditions.

Coach [Questionable] Although Coach’s official statement says they will not knowingly allow the use of forced labor in their supply chain, there is little supply chain transparency and little evidence of suppliers being investigated for sustainable labor conditions.

Tommy Hilfiger-[Not Great] Tommy Hilfiger was known to employ laborers in extremely unsafe conditions, leading to the death of 29 workers in a factory back in 2012. They improved conditions only in the face of scandal when ABC was set to air a report on their factories’ horrific working conditions. They have largely avoided scandal since. Free2work gives the company a ‘C’ grade on their labor conditions.

Under Armour – [Not Great] Under Armour executives are attempting record-setting hikes to some of the world’s highest peaks to raise awareness and combat human trafficking.  However, it is consistently ranked low on surveys evaluating their slavery footprint. They also have no policy on the sourcing of their cotton.

SAFE BRANDS TO BUY CLOTHING FROM:

A Compilation of Brands Actively Fighting Against Human Trafficking:

EndSalveryNow’s Shopping guide for everything from chocolate to clothes and technology:

Slavery's Legacies in Human Trafficking Advocacy
The Department of State’s 2020 Trafficking in Persons Report
Top Countries for Modern-Day Slavery
Part 7: Do you Know Who your Kids Are Chatting With? Why Online Safety Matters