Temporary work visas are supposed to be good for both workers and the U.S. economy. In theory, these visas allow U.S. businesses to fill mostly low-wage jobs that would otherwise sit vacant while giving migrant workers an opportunity to earn more than they can in their home countries. Indeed the migrants are often referred to as “guest” workers – a term that implies dignity and respect. But in practice, data from the National Human Trafficking Hotline shows that these guests — workers who have followed all the rules and laws and are expecting simply to earn a decent living and return home — are frequently victimized by trafficking or exploitation.

Temporary work visas are intended to provide decent jobs to migrant workers while helping U.S. businesses meet their labor needs by filling mostly low-wage jobs that would otherwise sit vacant. Policymakers often refer to the migrants who come to this country as “guest workers.” But data from the National Human Trafficking Hotline shows that these guests — workers who have followed all the rules and laws and are expecting simply to earn a decent living and return home — are frequently exploited and even victimized by forced labor and other forms of trafficking. Indeed, exploitation, trafficking and abuse have become endemic to many of the visa categories.

Overall, more than half of the victims of labor trafficking reported to the Trafficking Hotline during this period whose immigration status was identified were foreign nationals holding legal visas of some kind, including temporary work visas. That is no way to treat a guest — let alone hundreds of thousands of them.

The Trafficking Hotline exists first and foremost to assist victims of human trafficking. This means people seeking help are only asked to provide information that will allow the Trafficking Hotline team to offer the best possible options for support. Data collection is secondary. As a result, information about a potential victim’s visa status is not always available. For the purposes of this report, Polaris analyzed data from the four major temporary visa programs heard about most frequently on the Trafficking Hotline. Several government agencies are involved in the issuance of these temporary work visas, including the U.S. Departments of Labor, State and Homeland Security. The complexity and opacity of the various programs makes it difficult to determine exactly how many guest workers are in the United States on any given day. The Economic Policy Institute has estimated that in Fiscal Year 2019, more than two million temporary workers were employed, or 1.2 percent of the U.S. labor force. 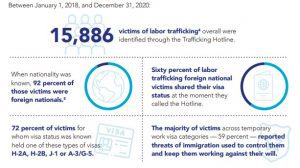 The data also revealed significant observations about each visa category:

• Labor Trafficking of Agriculture Workers on H-2A Visas: COVID-19 highlighted that U.S. agriculture would collapse without foreign workers, but the current system leaves those workers almost entirely unprotected from rampant abuse, exploitation and trafficking. Fifty-eight percent were threatened with immigration consequences such as deportation, and 32 percent were threatened with being blacklisted from working in the U.S. again. Additionally, 58 percent reported having to work excessive hours, and 41 percent reported that they had their wages withheld or taken.

• Labor Trafficking of Temporary Workers Hired for General Labor on H-2B Visas: These jobs are generally low-wage, manual labor and might include construction, meatpacking, hotels, landscaping and forestry. Sixty-eight percent of victims reported threats of deportation or to report to immigration and 47 percent reported that they were given fraudulent or misinformation about the job conditions.

• Labor Trafficking of Workers on J-1 Visas: J-1 visas are designed to promote cultural exchange and are used for a variety of jobs including seasonal work for amusement parks and as lifeguards, camp counselors, and au pairs. Victims in this data set were predominantly female (67 percent) and from the Philippines (17 percent). Industries varied, but 31 percent were in manufacturing/factories (see page 38 for an explanation of a specific case of J-1 visa abuse). Sixty percent reported having to work excessive hours at their jobs.

• Labor Trafficking of Domestic Workers Involving A-3 and G-5 Visas: When detailed to work in the United States, diplomats and people who work in certain international agencies, like the United Nations and the World Bank, may bring household staff from their home countries on A-3 or G-5 visas. Victims in the dataset are primarily female (79 percent), and threats to report to immigration were reported as the most common method of control (64 percent). Victims reported having to work excessive working hours (57 percent); having their wages withheld or taken (57 percent); and that the jobs were misrepresented as entailing a specific amount of work, specific pay or other working conditions that were not met (50 percent).

Based on these learnings, Polaris has developed a non-exhaustive set of priority recommendations to increase transparency and accountability and more effectively protect workers on temporary visas. These policy solutions are detailed in Part 3 of the report.

Our nation’s immigration system is badly broken. On this, experts, advocates and political leaders from across the political spectrum have agreed for at least a decade. But in a polarized environment, the complexity of the issue and the passions it evokes have made real reform elusive.

Against this backdrop, expanding the number of temporary work visas issued appears, on its face, to be a reasonable stopgap measure that can ease both the economic pressure driving migration south of the U.S. border while meeting the needs of American businesses for low-wage labor. Indeed, this perceived “win-win” situation is exactly why temporary work visas exist at all — and maintain a certain degree of bipartisan support at a time of profound political polarization.

Unfortunately, the reality of the U.S. temporary work visa system does not match this perception. As the number of authorized temporary worker visas has grown, so too have the challenges and controversies surrounding them. Although temporary visas do indeed provide cheap labor to U.S. businesses and, in the case of certain visas, individual families, the workers’ side of the equation is deeply alarming.

This study analyzes data gathered by the Polaris-operated National Human Trafficking Hotline during the calendar years 2018-2020. In that time period, Polaris learned of nearly 4,0007 individual victims of labor trafficking who were in the United States on temporary work visas.

Overall, more than half of these victims whose immigration status was identified were foreign nationals holding legal visas of some kind, including temporary work visas. Human trafficking is notoriously underreported, meaning that the individuals whose cases were reported likely represent only a very small fraction of the number of actual victims.

The time period in question is not an anomaly. The near-epidemic level of human rights abuses perpetrated against workers holding legal work visas and brought here under government sponsored programs has appeared year after year, since Polaris began collecting the information and analyzing the data. Similarly, a 2021 analysis of Trafficking Hotline data shows a drastic 70 percent increase in reports of trafficking of workers with H-2A visas during the worst days of the pandemic lockdowns. One-third of these victims reported that their supervisors denied them access to medical attention in the middle of the lethal global pandemic.

Given this track record, it seems clear that expanding the number of visas issued without changing the way the visa programs are administered and overseen at virtually every level will only lead to more situations of trafficking, exploitation and abuse.