Jails around the country are using inmates to fulfil high-value contracts with Thai manufacturers, including one that exports nets to the United States, according to documents obtained under freedom of information (FOI) rules.

Former prisoners interviewed by the Thomson Reuters Foundation said prison officers threatened to beat them with batons, withdraw the right to wash or push back their release date if they did not meet stringent targets.

The work was compulsory, but paid only a fraction of Thailand’s minimum wage and some workers were not paid at all, they said.

“(The officers) would say that if we didn’t make five nets a week, we would be punished,” said one former inmate at Surin Central Prison in northeast Thailand in a phone interview.

“It was 2pm one day and I wasn’t able to finish the nets in time, so I was forced to lie down in the sun and roll over in the dirt,” said Ta, who was released last year after serving two years and asked to be identified only by his nickname.

Thailand’s Corrections Department did not respond to a request for comment by the time of publication.

Ta said he earned three baht (9 cents) per net. Thailand’s minimum wage ranges from 313-336 baht per day, depending on the province.

Most prisoners who spoke to the Thomson Reuters Foundation said they were earning the equivalent of about 30 baht a month, though some said they received no pay at all.

Thailand has the largest prison population in Southeast Asia, with about 282,000 inmates in its 143 jails, mostly on drug convictions.

Jails are seriously overcrowded and do not meet international standards, according to a recent report by the International Federation for Human Rights (FIDH).

The prison work programme was intended to provide on-the-job training that could help inmates secure paid work after their release, according to promotional material from the Corrections Department.

But rights groups including the FIDH say it has become exploitative, citing low pay, harsh working conditions and the use of punishment when workers do not meet quotas.

The work is mostly manual and ranges from folding paper bags for retailers to manufacturing clothing.

Ex-prisoners who spoke to the Thomson Reuters Foundation said making fishing nets was particularly tough, leaving them with painful blisters and cuts from the sharp fibres.

They said most inmates had to work unless they had connections with prison officers, paid a bribe or gave others money to do the work on their behalf.

One senior judicial official said the practice could breach Thailand’s anti-trafficking legislation if the work was being done for the benefit of a private companies.

“These prisoners are not working voluntarily and they are unable to refuse work due to threat of a penalty, such as being physically harmed,” said Pravit Roykaew, a public prosecutor and deputy director-general of the Department of Trafficking in Persons Litigation. 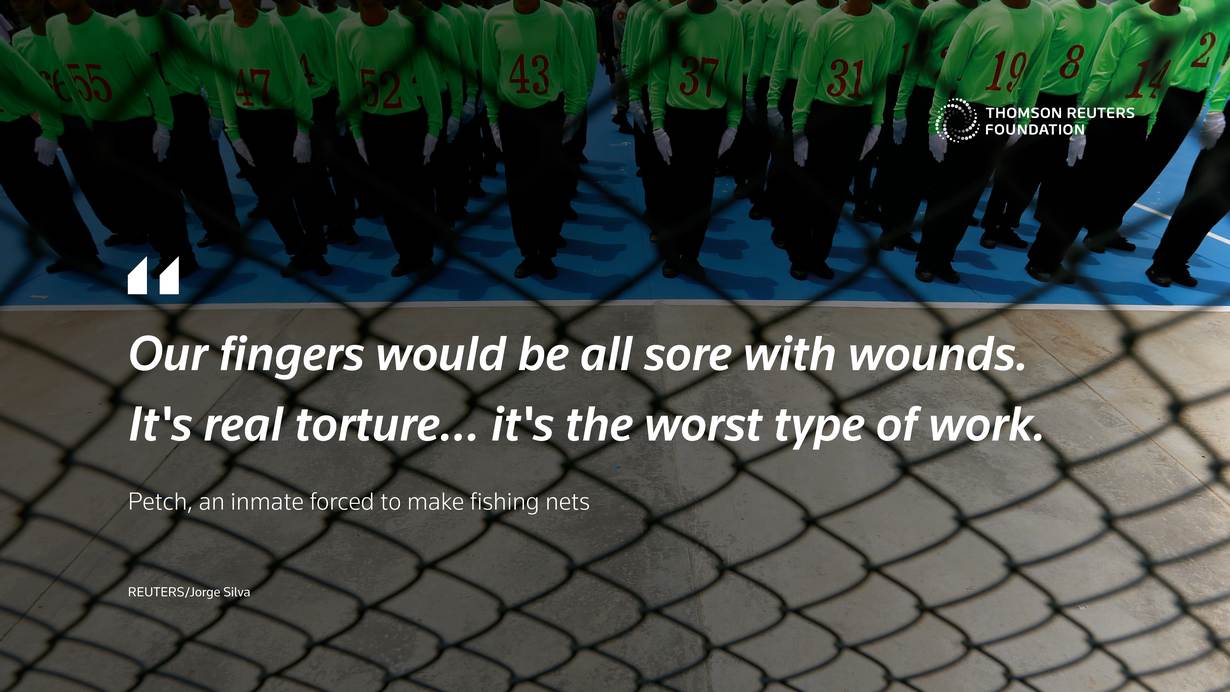 The Thomson Reuters Foundation sent FOI requests to 142 jails, of which 54 disclosed contracts with companies or individuals to produce fishing nets.

Another 30 responded and disclosed contracts in other sectors, while the others either did not respond or did not use prison labour.

Most of the prisons that disclosed contracts redacted the names of companies and individuals, citing an order from the Department of Corrections. The Thomson Reuters Foundation obtained some redacted names after submitting appeals.

They include Thailand’s biggest net manufacturer, Khon Kaen Fishing Net Factory (KKF), which last year sold 2,364 tonnes of fishing nets worth about $12 million to the United States, according to a recent report by Maia Research.

KKF asked at least one prison not to disclose its contracts under the FOI requests, a letter from the company seen by the Thomson Reuters Foundation showed.

The company declined to comment when contacted by the Thomson Reuters Foundation.

The U.S. Department of Labor (DOL) said it was “concerned about the allegation of prisons in Thailand using inmates to produce fishing nets for private companies”, pointing out that the Tariff Act prohibits the import of goods produced by prison or forced labour.

“We take all types of information into consideration when developing our List of Goods Produced by Child Labor or Forced Labor,” it said in an emailed statement, referring to a biennial list of goods believed to be produced in this way.

“This includes information gathered through research, investigative reporting, or by other means.”

Thailand has for years been under pressure to tackle abuses in its multi-billion-dollar seafood industry, including human trafficking, forced labour and violence on boats and at onshore processing facilities.

In recent years, the Southeast Asian nation has improved its record on modern slavery.

In its latest annual report, the United States said Thailand was making significant efforts to eliminate trafficking, including by improving coordination with civil society, though official corruption was undermining anti-trafficking efforts.

Prisoners have been put to work for centuries, from dredging waterways in 18th century England to making arms in Soviet gulags or forced into countless mining and manufacturing schemes that still operate today.

Some 560,000 prisoners were victims of forced labour to the benefit of private individuals or organisations in 2016 – the most recent statistics available – according to anti-slavery group Alliance 8.7.

The United Nations global guidelines on how to treat prisoners – known as the “Nelson Mandela Rules” – call on member states to run “a system of equitable remuneration of the work of prisoners”.

At Yala Central Prison in southern Thailand, hundreds of inmates would produce fishing nets for about six hours a day from Monday to Friday, according to two former prisoners who were released this year.

Neither experienced punishment directly, but both said they had witnessed other inmates being punished.

“I would see my friends being punished every day. I was told that prison officers weren’t supposed to hurt inmates, but in reality, prisons are not inspected,” said one, speaking on condition of anonymity.

“(The prisoners) would be hit on the back with a baseball bat, and moved to solitary confinement.”

“No visits would be allowed because they (officers) are afraid prisoners would tell their relatives.” 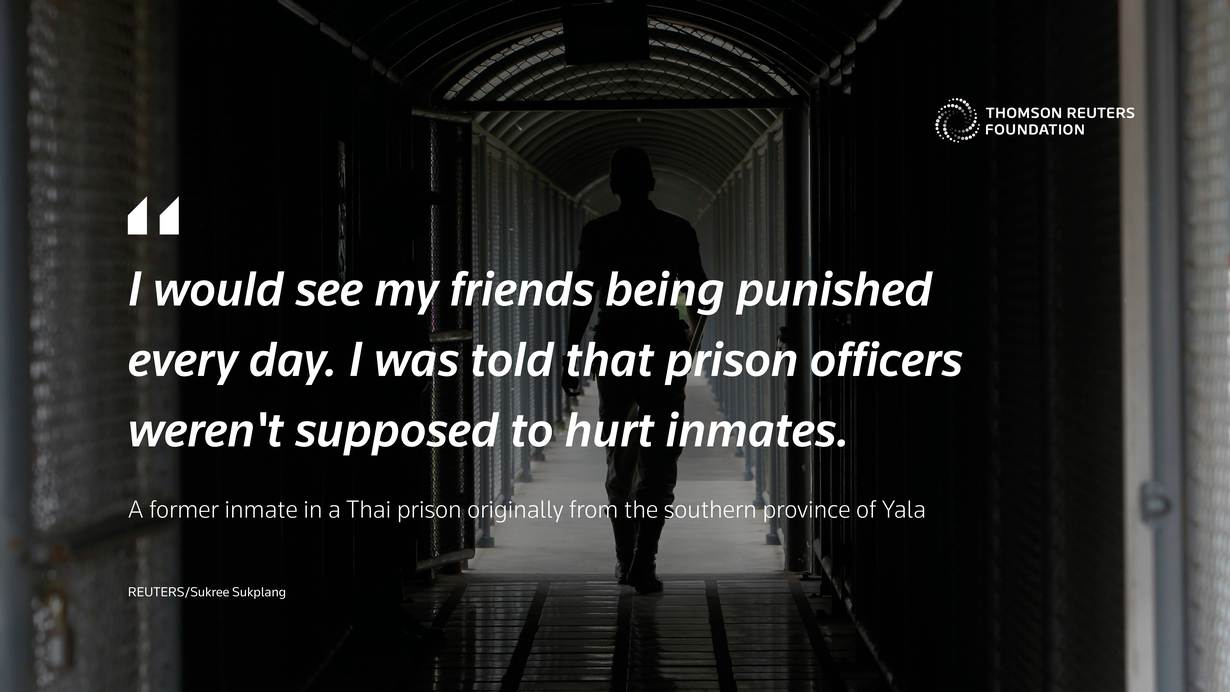 None of the former prisoners interviewed by the Thomson Reuters Foundation went on to make fishing nets after their release.

“The officers have direct power over the inmates, who are in a difficult position to resist,” he said.

Andrea Giorgetta, Asia director at the International Federation for Human Rights, called on the Thai government to investigate the allegations.

He said the Thomson Reuters Foundation’s findings of low pay and punishment for failing to meet targets were in line with research by the Federation, a network of 192 human rights organisations.

“All clues point to practices that constitute violations of numerous international human rights standards and may well amount to forced labour,” said Giorgetta.

The International Labour Organisation, a U.N. agency, said its compliance assessments had not so far found Thai prison practices to go against the country’s obligations under the Forced Labour Convention.

The Convention states that compulsory prison work does not constitute forced labour as long as it is performed under the supervision of a public authority and the prisoner is not put at the disposal of a private company.

All the former prisoners said their work took place in jail, though three said they knew inmates at the Khon Kaen Central Prison in northeastern Thailand who worked at factories belonging to KKF, the company that exports to the U.S.

Two of them said they also made nets for KKF, recalling the company name from receipts sent to the prison. It was also marked on pieces of paper inside the packaging that came with the nets, they said.

“If we didn’t meet the target, they (prison wardens) would force us to remove our shirts and roll over on the ground or we would be beaten by a baton,” said a former prisoner who made fishing nets for KKF and other companies in 2019.

“I would also hear the threats – ‘if you don’t finish, you’ll get it’,” he said, quoting prison guards.

Some of the former prisoners said their guards benefited financially from the work they were forced to do.

Most of the contracts obtained by the Thomson Reuters Foundation did not specify how the money would be distributed, showing only the number of nets, the overall payment amount and the deadline.

But three said payments would be split between the prisoners, the government and prison officers. One contract signed in 2020 with Si Sa Ket Prison stated that prison officers would receive 15% of the net takings.

Petch started a prison sentence in Songkhla in southern Thailand in 2013, serving a total of six years.

During that time, he was forced to work making fishing nets under threat of punishment. He was not told the name of the company, but said he saw the KKF logo inside bags containing the nets that were brought to prisoners.

Petch said prison guards were supposed to hold a book under their arms if they beat prisoners to limit the severity. But he said they did not comply and he saw fellow inmates kicked and beaten for not being able to meet the daily target.

“It’s tiring as hell,” said the 27-year-old, who asked to be identified only by his nickname. “But everyone inside knows it’s a moneymaker (for officers).