A Saskatoon-based charity that runs a home for girls in Ukraine has converted the property into a safe house for refugees.

“All our staff is still there and being paid,” Vice-president of Nashi, Andrew Allsopp said. “We take in refugees that are coming from Eastern Ukraine making their way to the border or just have no place to go.”

He said there are about a dozen at the home at any given time.

“They come and go as they are coming through.”

Allsopp said one mother with three children had come through over the summer.

“All three kids were disabled but she got there,” he said. “Because our staff is proficient in caring for children we just said ‘Here, go grab a shower and go to bed. She slept for 20 hours.”

He said she stayed there for three days and they gave her and the kids a ride to the border.

However, Allsopp said the organization is walking a fine line.

“Our mandate does not allow us to get involved with any kind of war effort,” he explained. “Even humanitarian stuff. It’s difficult for us to give money or supplies to other organizations because of the (Canada Revenue Agency) rules — but we are working on that right now to get some clarifications.”

He said they are able to take in refugees as the girls the charity typically helps have been moved to Poland due to the war.

“The war has not actually reached where the safe house is,” Allsopp said, but he added there have been some missiles flying overhead.

“The air raid siren going off constantly and some things are in short supply, power keeps going on and off, things like that,” he said. 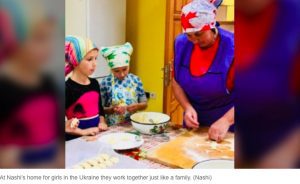 “It’s not in a good place. These girls have obviously been through a lot of trauma already in their lives and just getting into what they consider a safe place.”

The girls were moved to Poland in March of last year.

“We decided for their own anxiety levels to get them out of there and take them to Poland,” Allsopp said.

Allsopp said Nashi’s mission was to battle human trafficking, which is why they built a home for girls.

“Human trafficking is still a huge problem and made worse by war.”

He described it as slavery, and said it was a large money maker, like drugs and weapons – but worse.

“Drugs you can only sell once. With the advent of the internet…child pornography has just exploded.”

He said they built the safe house for 15 or 16-year-olds to learn life skills.

“But the traffickers were taking 5-year-olds,” Allsopp said.

“We had to expand our operations to handle long-term care. Kids who will be with us for 15 years not just one or two years.”

The building was a former kindergarten and can house up to 20 girls, according to the Nashi website. It’s called the Maple Leaf House as there are plaques in the shape of maple leaves with the names of those who helped construct it. 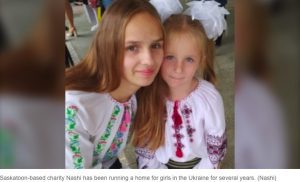