February 8- International Day of Prayer and Awareness against Human Trafficking 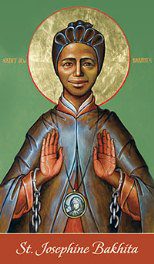 St. Josephine Bakhita’s story is one of slavery and triumph of the human spirit. Born in the Darfur region of southern Sudan, around 1869, Josephine was kidnapped around the age of seven, sold into slavery and given the name Bakhita, which means fortunate in Arabic. She was re-sold several times, finally in 1883 to the Italian consul in Khartoum, Sudan. In 1885, Josephine journeyed to Italy with her master. During her enslavement Josephine experienced abuse and forcible tattooing. In Italy, Josephine served as a nanny to the daughter of an Italian noble family and accompanied her charge to Venice Institute of the Catechumens, which was run by the Canossian sisters, a Catholic women religious order.   Josephine felt drawn to the Canossians and was baptized and confirmed in the Catholic faith in 1890, taking the name Josephine. When her owner returned from Africa and wanted Josephine to come back to Africa with the family, the future saint and trafficking victim refused to go. In the ensuing court case, the Canossian sisters and the patriarch of Venice intervened on Josephine’s behalf, concluding that since slavery was illegal in Italy at the time, she had actually been free since when she arrived to Italy in 1885. Josephine entered the Institute of St. Magdalene of Canossa in 1893 and in 1896 became a Canossian sister. Josephine died in 1947, thousands came to observe her body and mourn. She was made a saint in 2000 by Pope John Paul II.

Josephine’s emancipation and subsequent career of service to community and faith illustrates the commitment that faith groups have to combatting slavery historically. Judaism, Christianity, Islam, Hinduism and Buddhism all have roots in the fight for emancipation and recognizing human dignity of the person. On this day, we should recognize the contributions of faith groups internationally, and their efforts to bear witness to exploitation, fight for emancipation of all people and empower and stand in solidarity with survivors. To commemorate February 8th and Human Trafficking Awareness month, which is in January, many interfaith groups have created toolkits and have scheduled interfaith prayer services. Tell us about your celebrations in your local community for the international day of prayer to eradicate human trafficking.

What’s in Your Chocolate this Halloween?
Life After Human Trafficking
BIPOC Trans Women and Girls: The Missing Narrative in Human Trafficking
Modern-day Slavery & Environmental Destruction: A Discussion with Kevin Bales