The Climate is Changing, and so is Human Trafficking

The world is reckoning with the mounting strain of climate change. While the U.S. confronts a devastating summer of wildfires and floods, vulnerable countries around the world continue to suffer from acute and chronic environmental challenges. Tropical storms are getting bigger, droughts are getting drier, and sea level rise is getting faster. But what does this have to do with human trafficking?

The answer: a lot. The aftermath of typhoons and hurricanes are some of the most obvious sites of the climate change-trafficking nexus. After having their belongings and jobs destroyed, disaster victims become easy prey for traffickers. Widows, orphaned children, and men desperate for work may find themselves forced into prostitution or sweatshop labor in neighboring countries with little other recourse. In the wake of the 2004 Indian Ocean tsunami, child abductions for “adoption” in Indonesia surged.

The connection between trafficking and slower-onset changes in the environment might be less obvious. In Syria, researchers speculate that the record-breaking drought from 2007 to 2010 and resulting widespread crop failure was one cause of the country’s conflict. Like in countless other humanitarian crises around the world, thousands of Syrians became vulnerable to trafficking in refugee camps and destination countries like Lebanon.

On the other side of the world, glaciers and lakes are disappearing. Unable to sustain themselves on traditional fishing and farming practices, rural and largely indigenous populations throughout Latin America have been forced to migrate to cities. In Central America’s growing “dry corridor,” increasingly extreme and unpredictable weather is leaving some ten million people without dependable food or income. As a result, thousands of Guatemalans have made attempts to migrate to the U.S., hoping to find work for their family’s survival. Along these journeys of desperation, smugglers and traffickers thrive.

Academics and practitioners are just now starting to map the full constellation of risk within this issue. Cristopher O’Connell, a postdoctoral fellow with Dublin City University and Anti-Slavery International in London, researches the relationship between climate change and contemporary forms of slavery in Peru and Bolivia. In a recent conversation with HTS, he describes how “the relationship between climate change, different forms of exploitation, and environmental damage is a bit harder to see, but it’s there –and it acts in a circular fashion.” He sees this dynamic playing out in his own fieldwork. In 2016, Bolivia second-largest lake, Lake Poopó, dried up, destroying local livelihoods and forcing half of the population to migrate. O’Connell notes that it didn’t disappear just because of climate change. Local mining and agricultural operations in the area were also draining this critical lifeblood for years.

“In return,” he explains, “the indigenous people who were no longer able to fish as they had done for generations are forced into very bad working conditions, including forced labor in mining and agribusiness themselves…they end up working in the same industries that are polluting and deforesting these communities.” 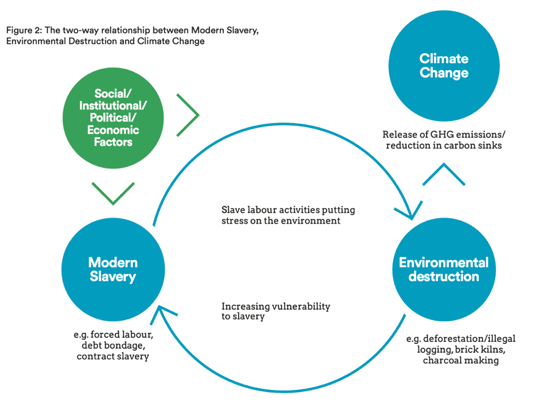 We see a similar, devastating cycle playing out across the world. In his book Blood and Earth, Kevin Bales describes how hunger for shrimp in the West is destroying lives in Southeast Asia. The great mangrove forest of the Sundarbans is an environmental wonder. It not only gobbles up carbon from the atmosphere, but also protects the people there from the worst of the Bay of Bengal’s powerful cyclones. But over the years, rising demand for cheap seafood in Europe and the United States has led to widespread clearing of the mangroves to make room for shrimp and fish farming, an industry rife with modern day slavery and child labor.

When Cyclone Aila’s twenty-five-foot storm surge hit this now stripped-bare area, the results were cataclysmic. 400,000 men, women, and children lost everything; 75% of households in the Indian Sundarbans reported labor migration of at least one family member, 1/5 of them being children. Those who stayed were forced deeper into the forest– and into desperation. Like we saw in Bolivia, many of the Sundarban’s poor, rural inhabitants found work in the very industry that had eaten away at their home and ecosystem. Stuck in situations of debt bondage and forced labor, they might spend 80 hours per week clearing the way for more fish camps.

In Ghana, people displaced by mining-related deforestation end up in debt bondage in the gold mining industry. In India, Pakistan, and Cambodia, many seasonal migrants work without pay in highly toxic and polluting brick kilns. And in Thailand, migrants from agrarian communities in Cambodia are trafficked into slavery on fishing boats that are depleting the ocean’s resources, forcing them deeper into the ocean and further from labor rights regulation. This story of cyclical exploitation of people and the earth, it turns out, is not an outlier.

The work being done at the intersection of climate change and trafficking is still, however, in its infancy. More research and international investment in this area is needed. For now, academics and practitioners have proposed a few recommendations, including:

But while these steps are necessary to mitigate the damage, solving climate change remains the only real solution.

Aubrey Calaway wrote this blog post when she was a research fellow at Human Trafficking Search.  She is currently a correspondent at Earth Refuge and a podcast producer at Brightline Defense.

Climate Crisis = Human Crisis: At the Crossroads of Climate Change and Human Trafficking
Preparing for the Known Unknown: Human Trafficking and Disaster Response
Climate Change and the Cost of Green Energy to People in the Democratic Republic of Congo
Avoiding Cascading Effects: Why Suspension of The Davis-Bacon Act May Allow Forced/Exploited Labor