She said she hates seeing the South shown in movies as a place where no one has air conditioning and every road is a dirt road and is tired of negative assumptions from people who don’t live in the region. Coleman said Alabama is “an amazing place.”

Now, the state’s constitution is entering a new era.

On Tuesday, Alabamians voted to pass the Alabama Constitution of 2022 and a companion amendment, which will remove racist language and organize amendments into distinct categories. It’s a pretty limited update, aimed mostly at modernizing some text and making it easier to read. Here’s where you can read the new constitution.

The new constitution will replace its 1901 predecessor after a bipartisan effort from the state legislature. Before making its way to voters, the measure passed both chambers without a dissenting vote. 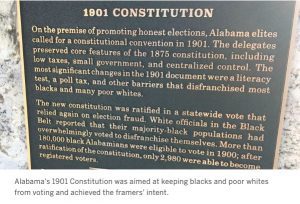 It also received support across the state from voters — according to preliminary results from the secretary of state’s office, 76.4% of people who cast a ballot Tuesday, or 851,293 people, voted to ratify the updated constitution.

“It definitely was a team effort when it came to the entire body coming together to do something that we feel will ultimately help impact the overall branding of the state of Alabama,” Coleman said.

The 2022 constitution also removes repealed sections of the old document, such as section 102, which outlawed interracial marriage. While the law was repealed in 2000, the old text still lingered in the state constitution.

Even though many parts of state law had already been invalidated through state or federal actions, the removal of racist language points to Alabama’s priorities, said John Neiman, a shareholder at Maynard Cooper and the former solicitor general of Alabama.

Alabama joins several other states, including Utah and Nebraska, that made efforts to remove racist language from their constitutions in recent years.

Coleman said she believes that civil unrest in 2020 was a driving force in uniting constituents and representatives to act, and that residents of Alabama realized “there are still some inequities in this country.

That’s when some of her Republican colleagues reached out to her to be part of her effort to update the constitution. She said the process wasn’t perfect, but the conversations were fruitful.

Along with a bipartisan effort to remove racist language, the new constitution also will be more organized.

Alabama’s updated constitution will see amendments grouped according to their topic, as well as amendments pertaining to different counties. Amendment 10, its companion amendment on the 2022 ballot, allows new amendments to be grouped accordingly. Coleman said she enjoyed that process, too.

The constitution, which has nearly 1,000 amendments, is still the longest in the United States. It’s three times longer than the next-longest state constitution.

Othni Lathram, the director of the Alabama Legislative Services Agency and code commissioner for the constitution, said in October that the 1901 constitution’s rambling structure led to frequent confusion.

“There’s a number of improvements we’ve made in 120 years that are almost impossible to find. Section 102 of the Constitution prohibits a legislature from allowing for interracial marriage,” Lathram said. “The voters voted to repeal that provision. However, if you get to Section 102, it’s still there. And you have to find amendment 667 to know that it’s been repealed, right? This actually cures all of that.”

“I want people to know that we have a diverse state. We have a diverse leadership. We have people that have friendships that transcend race and socioeconomic background, educational backgrounds, and there’s just good people in our state,” she said.