Cash, credit cards and passports were found in the house of the alleged ringleader of a sex trafficking gang. Photograph: Handout

Investigators in Ukraine said they had foiled a criminal gang who forced women into sex work abroad after luring them with false adverts for legitimate employment.

Authorities in Kyiv arrested the suspected leader of the gang after months of surveillance resulted in them stopping a woman as she was about to cross the border. They were then able to confirm the suspect’s involvement.

The 21-year-old, who has a son to support, had lost her job because of the war and was about to cross into Hungary, travel on to Vienna and, from there, board a flight for Istanbul, where she believed a legitimate job offer waited for her.

After assisting her, prosecutors were then able to arrest a 31-year-old male suspected of being the leader of a trafficking ring. Based in the Kyiv region, the gang allegedly recruited a number of vulnerable Ukrainian women after the Russian invasion with the false prospect of a legal job, sent them to Turkey and forced them into sex work.

In the suspect’s home, prosecutors found thousands of dollars in cash, credit cards, some registered in China, and a diary, seen by the Guardian, in which the suspect kept a record of the women and their activity in Turkey.

“Since the beginning of the war a lot of women in Ukraine bear financial hardship,” said Oleh Tkalenko, a senior prosecutor for the Kyiv region who led the investigation. “A lot of them lost their jobs. It was very hard, especially for single mothers. In one of the towns in the Kyiv region, a group of men organised a series of Telegram channels, called ‘Meetings’, ‘Meet your future husband’ or ‘Escort service’ where they recruited these women. Preying on their vulnerable situation, they were offering them jobs in Turkey.” 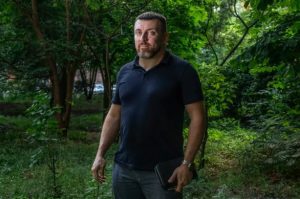 Prosecutors said that women were offered work accompanying wealthy men to prestigious events. “When the women got there, they were involved in prostitution,” said Tkalenko. “They were scammed.”

In early June, investigators began tracking the movements and contacts of a man living near the capital who appeared to be the ringleader. After a few weeks, the authorities managed to trace one of his victims, a woman from Donetsk who had been living in Kyiv and was making her way to the border village of Chop, on to Hungary, then Austria where she would board the flight for Istanbul.

“With the detectives, we decided to intervene,” said Tkalenko. “We stopped the woman at the border. Her vulnerable condition was clear: absence of money, a child to support, overall financial difficulties because of the war. The ringleader we were surveilling had bought her tickets, given her some money and organised her route. At that point, we arrested the man and searched his so-called ‘office’, where we found irrefutable evidence.”

The man allegedly kept records of the women in Turkey in a notebook. Under their real names or nicknames he had listed their work days, and a price list for each service.

At the moment, prosecutors do not know how many women were forced into sex work and sent to Turkey and allegedly other countries in the EU. At least 10 women’s names were listed in the ringleader’s notebook.

“Men and women in Ukraine in this period can be vulnerable to labour and sexual exploitation,” said Varvara Zhluktenko, communications officer at the UN’s International Organization for Migration in Ukraine. “We have a hotline that has been operating for many years to provide assistance to victims of human trafficking. Since the beginning of the war, we have cases of Ukrainian women who are looking for accommodation abroad in EU member states and they are communicating to potential hosts over the internet while they are still in Ukraine.

“We had a case of a flat owner living in Europe who told a woman that she could stay at his place in exchange for sex. There are also men who present themselves as travel agents and push Ukrainian women to go with them in order to leave the country, and they are insisting like this is the last chance for them to leave Ukraine, which is very suspicious.”

Tkalenko said: “Based on the evidence collected, we suspect that there are more women being exploited in Turkey at the moment. There are records in the man’s notebook. We are now getting ready to cooperate with our Turkish colleagues.”

Prosecutors said the woman stopped at the border is cooperating with the authorities and is prepared to testify against the gang leader and his associates.

Since the Russian invasion, human rights organisations said women and child refugees fleeing Ukraine to Poland are being targeted by suspected sex traffickers, operating alone and in gangs.

Searching for Safety: Confronting the Sexual Exploitation and Trafficking of Venezuelan Women and Gi...
Safety Beyond Handwashing During the COVID-19 Outbreak
Towards a multi-scale approach for an Earth observation-based assessment of natural resource exploit...
Eliminating and Preventing Forced Labor: Checkpoints App