U.S. says Chinese lithium-ion batteries are made with child labour as trade war spills into EVs

Children wash copper at a mine in the Democratic Republic of Congo, in 2010. PHOTO BY GWENN DUBOURTHOUMIEU/AFP/GETTY IMAGES

The U.S. government’s decision to tie a generous electric-vehicle subsidy to inputs from friendly countries was an obvious attempt to shift the EV supply chains away from China.

But the power of the purse isn’t the only strategy available to Washington. The Biden administration in late September added lithium-ion batteries from China to the U.S. Labor Department’s list of products derived from child and forced labour, a more subtle example of how the United States intends to offset Beijing’s influence over a once-in-a-lifetime technological change, some industry insiders say.

The Labor Department said China imports almost 90 per cent of its cobalt from the Democratic Republic of Congo (DRC), where a significant amount of the mineral is produced through informal mines that employ children. The Asian powerhouse uses about 50 to 80 per cent of its cobalt imports to make battery chemicals and components, justification enough for including Chinese batteries among items produced with child labour, the Labor Department said.

It’s been known for years that child labour is prevalent among DRC’s artisanal and small-scale mines, yet this is the first time the U.S. government has chosen to include Chinese batteries, which dominate the market. Companies that use products from the list are in no danger of prosecution, but they might face uncomfortable questions from customers, activists and politicians.

The compendium, which also linked solar cells from China and crude palm oil from Indonesia to forced labour, “can be considered a risk radar used to raise public awareness” on labour exploitation, said Christine Feroli, a spokesperson for the U.S. Labor Department.

The addition of lithium-ion batteries to the list comes at a time when the U.S. is looking to diversify its supply chain away from China, which has a strong grasp of the EV sector, and toward its allies, a trend known as “friendshoring.” In a speech in Washington, D.C., last week, Canada’s deputy prime minister, Chrystia Freeland, also emphasized the practice, stressing the need to speed up the development of energy projects in Canada so that the nation can support allies in need. 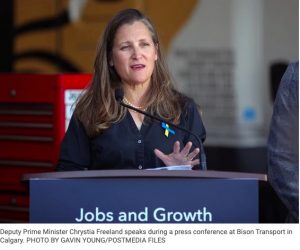 “It feels like the latest chapter in the U.S. versus China trade war has spilled over into the EVs and lithium-ion batteries,” said Simon Moores, CEO of Benchmark Mineral Intelligence, a research group based in London, in an interview. “The U.S. will still rely on supply chains that pass through China for its lithium-ion batteries for some time, so it’s a high risk strategy until the U.S. builds it own lithium-ion economy.”

Moores added that while DRC produces more than 70 per cent of the world’s cobalt, “not all” of it is produced using illegal practices.

China leads the global EV industry and last year accounted for about half of all EV sales, according to the International Energy Agency. It also dominates the supply of metals required to make batteries that drive EVs.

Washington appears intent on building a “lithium-ion economy,” which could benefit Canada and other U.S. trading partners. In August, the U.S. passed the Inflation Reduction Act (IRA), which states that EVs containing batteries assembled in North America and made up of critical minerals sourced from the region could receive up to US$7,500 worth of tax credits, which could offset some of China’s advantages in the field.

According to Moores, steps like these could cause a “generational shift” and Canadian miners would have to be ready to take advantage because “Canada has the potential to be the gatekeeper for the North America electric vehicle boom, a key pillar of the Inflation Reduction Act,” he said.

In a similar vein, Theo Yameogo, head of mining and metals at global accounting firm Ernst & Young Global Ltd., said the latest step was taken due to “concern around security of the battery minerals supply chain.” However, the supply chain for minerals is “very complex” and focusing on cobalt alone would not solve the issue for the U.S., Yameogo said. 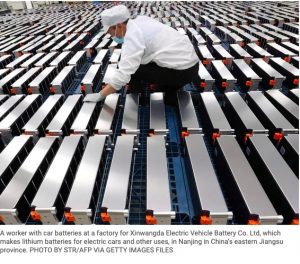 Troy Nazarewicz, a spokesperson for Fortune Minerals Ltd., a company that’s closing in on beginning construction of a cobalt mine and a refinery in Canada, said the U.S. was taking steps to “diversify and reduce its reliance” on China. “It is basically to encourage and perhaps force companies to move away from Chinese sources of critical minerals,” he said of the Labor Department’s decision to link Chinese batteries to child labour in Africa.

Toronto-based Electra Battery Materials Corp.’s Joe Racanelli, however, said he doesn’t think there’s a “direct correlation” between the list and the geopolitical motives of the Inflation Reduction Act. He said that the industry has been trying to deal with the labour exploitation in DRC’s informal mines for quite some time. “People want to make sure that as you are driving an electric vehicle where there is no child labour involved,” said Racanelli, Electra’s vice president of investor relations.

Electra recently inked a deal to supply global lithium-ion battery maker LG Energy Solution Ltd. with 7,000 tonnes of cobalt from its Ontario refinery and will be importing feed for the mineral from DRC mines that meet global ethical standards.

Toronto-based Sherritt International Corp., which refines cobalt in Canada, echoed that sentiment. Lucy Chitilian, Sheritt’s director of investor relations, said that while the step by the U.S. may provide “greater impetus” for Canada to build its own supply chain, the company doubts that “singling out” China as a consumer of cobalt mined by children is a move to push an agenda.

The demand for electric vehicles, which contain lithium-ion batteries, has been on the rise as countries look to accelerate their net-zero climate plans. The world will need more than 20 times the amount of lithium that was mined last year to meet demand by mid-century, due to growth in energy storage and electric vehicles, analysts from Benchmark Mineral Intelligence said on Oct. 13.

Freeland said last week in a speech at the Brookings Institution, a think-tank based in Washington, D.C., that democratic allies should embrace “friendshoring,” the practice of building supply chains through each other’s economies.

“If we are to tie our economies even more closely together, we must be confident that we will all follow the rules in our trade with each other, even and especially when it would be easier not to,” said Freeland.

She added that Canada needed to show “generosity in fast-tracking” energy and mining projects for its allies that need to “heat their homes and to manufacture electric vehicles.”

“I cite these examples because, critically, friendshoring must be green. The curse of oil is real, and so is the dependence of many of the world’s democracies on the world’s petro-tyrants.”