Cobalt Mining: The Dark Side of the Renewable Energy Transition

Cobalt is quickly becoming the defining example of the mineral conundrum at the heart of the renewable energy transition. As a key component of battery materials that power electric vehicles (EVs), cobalt is facing a sustained surge in demand as decarbonisation efforts progress. The world’s largest cobalt supplier is the Democratic Republic of Congo (DRC), where it is estimated that up to a fifth of the production is produced through artisanal miners. Cobalt mining, however, is associated with dangerous workers’ exploitation and other serious environmental and social issues. As such, questions have arisen as to whether the transition to electric vehicles and cobalt-based batteries is yet another example of environmental problem-shifting and what a renewable energy transition without cobalt could look like.

The Importance of Cobalt in the Renewable Energy Transition

There is an urgent need to reduce carbon emissions and address global warming in order to limit existing rises in temperatures. Meeting these goals, however, requires a complete transformation – changes to the ways that energy is produced, transported and consumed. A movement away from a fossil fuel-based economy requires the generation of alternative energy sources.

The International Energy Agency’s (IEA) “Net Zero by 2050” report notes that roughly 75% of current greenhouse gas emissions are produced by the energy sector. As such, decarbonising the energy sector has dominated both technological and social innovation efforts, with electric vehicles being just one example.

At the most basic level, EV batteries are charged and discharged through the flow of lithium ions between the anode (positively charged) and the cathode (negatively charged). The cathodes contain nickel, and play a role in delivering high energy density, which allows the vehicle to travel further. Cobalt in the cathodes ensures they don’t easily overheat or catch fire and helps to extend the life of batteries. An International Monetary Fund (IMF) report notes that a typical EV battery needs 8 kilograms (18 pounds) of lithium, 35 kilogram of manganese and 6-12 kilograms of cobalt.

In the race to develop battery-power to meet net-zero commitments, however, it is important not to overlook the global implications of such a transition. New energy sources, such as those required for batteries and electric vehicles, are now exerting enormous pressures on the environment. Two questions are quickly arising: Are there sufficient resources and ability to meet these increasing demands? And, just as importantly, what are the societal costs of meeting these demands in this way?

What Is Artisanal Mining And Why Does It Matter for the Renewable Energy Transition?

Efforts to meet the demand exerted by electric vehicles have so far been focused on increasing the supply of cobalt. In 2021, the Democratic Republic of Congo (DRC) was estimated to be producing between 60 and 70% of the world’s supply of cobalt.

The majority of the cobalt that is extracted is actually a by-product of existing copper mines. However, they are currently unable to increase their output to meet existing demands and have little financial incentive to do so until copper prices also rise to complement mining activity. The other major source of cobalt outside of existing copper mines in the DRC is produced via “artisanal” mining, producing up to 15% of the global cobalt supply. 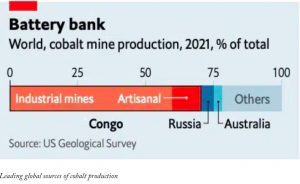 Given that artisanal miners in the DRC are currently producing more than Russia – the world’s second largest producer – the role that they play and the conditions under which they operate are important to understand. Artisanal miners hand-dig higher-grade ores than those extracted through industrial or mechanised production means. But there are well-reported problems with artisanal mining, both in terms of the social and environmental cost.

The small mines in which artisanal miners operate are often dangerous and polluting. The mining and refining processes are often labour intensive and associated with a variety of health problems as a result of accidents, overexertion, exposure to toxic chemicals and gases, and violence. And these miners, known locally as creseurs, are so economically reliant on this informal economy that these dangerous conditions cannot afford full consideration.

The environmental costs of cobalt mining activities are also substantial. Southern regions of the DRC are not only home to cobalt and copper, but also large amounts of uranium. In mining regions, scientists have made note of high radioactivity levels. In addition, mineral mining, similar to other industrial mining efforts, often produces pollution that leaches into neighbouring rivers and water sources. Dust from pulverised rock is known to cause breathing problems for local communities as well.

International firms that trade, refine and supply cobalt have been trying to understand how cobalt from artisanal mining has entered their supply chains. While in theory there are legal differences to industrial and artisanal mining supplies, in reality, the boundary between the two remains quite blurry. Despite pledges from companies to increase transparency regarding their cobalt sources and refineries or pledges to buy exclusively from other countries, very little in the conditions on the ground in the DRC have changed.

A dominant reason why there has been so little change in the region in a decade are the strong economic incentives resulting from artisanal mines. It is currently estimated that between 140,000-200,000 people work as artisanal miners in the DRC and most earn less than US$10 per day. While low compared to living standards in the Global North, that is considerably more than most earners in the country, who are living on an estimated US$1.90 a day.

Considering the vast economic incentives, both domestically and internationally to keep artisanal cobalt mines open, what does the green energy transition look like next?

Can Cobalt Mining be Improved?

Given that cobalt-based batteries are a crucial and inevitable part of the green energy transition, both large-scale industrial mining and artisanal mining are here to stay. A World Economic Forum (WEF) white paper in 2020 outlined the current state of artisanal cobalt mining in the DRC and offered recommendations to make the industry fair and safer.

Among them are the formalisation of a traditionally informal economy, which would include the adoption of common standards and metrics, the establishment of a monitoring and assessment process and knowledge-sharing, to ensure that a formalisation process is a multi-stakeholder one. Overall, the WEF suggests that increasing transparency would result in industry-wide changes. It also points to attempts formalisation of the garment industry almost 20 years ago as an example of common standards and metrics. However, critics would suggest that these efforts do little to address the root causes of systemic issues present in the artisanal mining industry and point to an increase in human rights violations in the garment industry as evidence of failure.

Rather than tackling supply-side problems with the cobalt mining industry, perhaps changes are better made on the demand side. Demand for cobalt is driven predominantly by the increased production of electric vehicles in an effort to decarbonise the transport sector. Some industry leaders have been attempting a pivot to cobalt-free batteries – technology which is already on the market.

In 2020, Reuters reported that Chinese battery maker CATL was developing an EV battery that did not require the use of cobalt or nickel, both key components in traditional EV batteries. Tesla also reported that half the vehicles manufactured in the first quarter of 2022 were produced using cobalt-free lithium iron phosphate – known also as lithium ferrophosphate or LFP batteries – proposed to be more sustainable alternatives.

But perhaps each of these alternatives are simply examples of environmental problem-shifting. In each of these scenarios, transitioning to EVs and developing cobalt-free batteries often lead to new, and sometimes more chaotic, complicated and severe environmental problems – something that we refer to as ‘environmental problem-shifting’. Critics have suggested that instead, a more radical and long-term solution would involve investments that decrease our dependence on vehicles, electric or fossil-fuel driven. Switching to electric cars addresses only a few of the issues presented by fossil fuels and clearly develops complications exemplified by cobalt mining in the DRC. Beyond batteries, cars also require tyres, whose manufacture and subsequent disposal happens at an enormous environmental cost.

While in many places cars are essential, this is often as a result of car-centric urban planning. A switch away from individual vehicles to electric mass transit, complemented by the development of separate bike lanes and broad pavements, would perhaps start to address this persistent issue of environmental problem-shifting. For some purposes and for some communities, using a car is unavoidable. But these are often easily substituted – cities like Amsterdam and Copenhagen are key examples of this.

In a time of multiple emergencies – climate chaos, the pandemic, rising economic insecurity –  fast decision-making is a necessity. Technology is often cited as playing a critical role in catalysing the renewable energy transition, but it is important to remember that technologies exist to serve us, not to dominate us. Perhaps a more radical approach to decarbonising the energy sector does not involve problem-shifting to the DRC, but instead in drastically reducing our dependence on the concept of cars themselves.

Beijing Olympics Begin Amid Atrocity Crimes
Unfinished Work In The Fight Against Forced Labor In Uzbekistan’s 2019 Cotton Harvest
The Facts Of, The Myths About, And The Solutions For Child Trafficking
Promising Practices: Lessons in the Use of Cash Transfers