The bleak world of trafficked children and modern slavery

Modern slavery. Domestic servitude. Trafficking. Exploitation. Whatever name you want to call it, increasing numbers of vulnerable people – many of them children – are being brought into England and Wales, often having been fed lies about employment, education and an elevated standard of living.

What they face instead is an unrelenting, and apparently inescapable, cycle of being used and abused. For money, for sex, for household drudgery. For errands that flirt with criminality until they become full-time, albeit unofficial and low-paid, jobs.

The latest Home Office figures indicate that in the first three months of 2022, nearly 4,000 potential victims of modern slavery were identified – and more than a third of those said they had been exploited when they were children.

These young victims come from all over the world: Albania, Eritrea, Nigeria, among other countries. Some of them manage to escape their captors and make it to a place of safety – some to relatives or friends, others into the care system.

But the care system is not the haven it could and should be.

One in three of the trafficked children (378 out of 1,231) in local authority accommodation, whether hotels, hostels, or foster families, went missing in 2020.

It is unsurprising to people who work in the system. 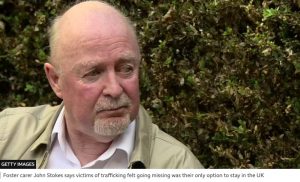 John Stokes is a charity worker in London who lives with his foster children in Bristol.

He has been fostering for more than 30 years. Six years ago he started fostering child victims of trafficking.

“Until I started working with children who come into contact with the Home Office, I didn’t realise how it operated or how dismissive they are of these people,” he said.

He believes victims of trafficking are being criminalised by the government as soon as they enter the country.

“They are interviewed for seven or eight minutes and that determines their next few years.

“But traffickers obviously tell them what to say, so they just say that.”

Research by children’s rights organisation Every Child Protected Against Trafficking UK (ECPAT UK) suggested trafficked children continue to be one of the groups of looked-after children most at risk of going missing in the UK.

Chief executive Patricia Durr explained: “We have to find out whether children are going missing because of a pull or push factor.

The charity echoed Mr Stokes’s observation: the traffickers tell their victims what to say to the authorities. They also give them a phone number to contact once they arrive, with the aim of pulling the children out of the care system and back into modern slavery. 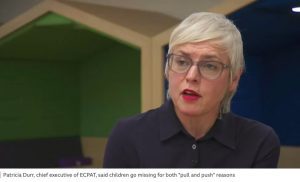 Mr Stokes’s foster son was trafficked from Albania. He was allowed to stay in the UK, but when he turned 18 he was told he had to go back.

The Stokes family has been fighting this decision, believing he would be killed if he returns to Albania.

“The choice for these kids is to either give themselves up and so they are taken back to Albania, or go missing. And they know they are likely to be re-trafficked,” the charity worker said.

“They may get forced back into the cannabis farms as the only way to survive.”

A lad who does not have a change of clothes.

A woman who, on the rare occasions she is seen, scurries to the shops and hurries straight back.

A man who gets picked up and dropped off at the same time and place every day.

A house where the curtains are always closed.

All are indicators that a person has been forced into modern slavery.

One girl we spoke to was taken from her parents in Nigeria aged 12. Pulled into the shadows of society, she was forced into a life no child should have to tolerate.

Rather than experiencing the normal highs and lows of entering her teenage years, she endured domestic slavery, abuse, isolation and oppression.

“The only time I got a rest would be when it was time for bed. [The woman I worked for] was obsessed with the bathroom. I had to clean it two or three times a day, every day.

“It was spotless. But I had to keep cleaning,” she explained.

“There was no talking to the neighbours – she especially emphasised that. She said no talking to anybody. I go to a place to get the shopping then I come home. If anyone asks me anything I say I don’t know. She said if I did say something they will take me back to Nigeria.

“One elderly neighbour, I think she was concerned and she called the police. And then the police came they asked if I was OK.

“I was scared. I just said ‘I don’t have anything to say’, because that is what my mum had told me to say. The police went away. They never came back for me.” 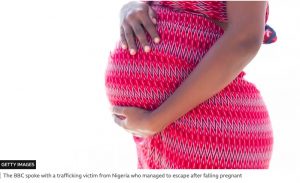 The domestic drudgery continued, but in time, more onerous duties were forced upon her. She was expected to have sex with multiple men.

And then she became pregnant.

It was the catalyst she needed: “It pushed me to leave. Before I didn’t have a reason but then I got pregnant and that was a reason.

“I had been raped, I had been used, I had to do things against my will. It was bad. I thought ‘I’m not going to have a child here. I need to protect them’.

“I remembered how my mum used to protect us and I thought ‘I want to do that’.”

She is now free from her trafficker, has become a mother, and is part of a group of trafficking survivors who meet every month to help advise charity workers on how to improve services.

Her trafficking story has an optimistic end. Many don’t.

Mr Stokes says he feels like he is working to feed the abusers, rather than the people he looks after.

“These kids are just fodder for the gangs and the traffickers, ” he said. 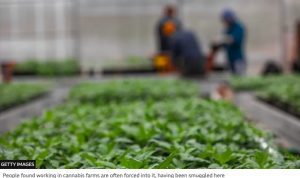 The government insists protecting vulnerable children “is one of the most important legal duties” for local authorities, which are responsible for all looked-after children in their area.

“If a child goes missing, they operate missing persons protocols with other local safeguarding agencies, including the police, to find them and make sure they are safe,” it said.

The government has also introduced “independent child trafficking guardians” to all local authorities in London and is rolling the scheme out across the country.

They are meant to provide one-on-one support to trafficked children where there is no-one with parental responsibility for that child.

But another survivor, a young man from Nigeria, said he did not even realise he had been trafficked.

He said he understands why some young people go missing. If they do not know they are victims, how do they know to ask for help?

“Some carers don’t actually care, it’s about the allowance they receive from the government. And it feels like they are working for the government, not for us.

“So imagine you are a trafficking victim – you just want to move or go missing,” he said.

“There are so many lies and negative things said about us that are untrue.

“We are human. We are not here to steal jobs. We have value. We need love and care.”