She Died Resisting an Abduction. Hundreds Like Her Are Forced Into Marriage

Pooja Kumari wasn’t your typical teenager. Lively, quick-witted and resourceful, the 15-year-old was a talented seamstress who would stitch beautiful clothes for her entire neighbourhood in Pakistan’s southeastern city of Sukkur.

The eldest daughter of a working class Hindu family, Kumari had set up a sewing station at home, where she babysat her four younger sisters while her parents worked.

“She was a brave little girl with a courageous heart. She took care of the whole family,” Oad, her uncle, told VICE World News. Oad has only been identified by his surname for safety.

Early in March, a Muslim man from an influential family, Wahid Bux Lashari, 24, allegedly began harassing Kumari to get her to convert to Islam and marry him. She resisted.

Two weeks later, she was dead.

On March 21, Lashari and two other men broke into Kumari’s home, attempted to abduct her and ended up firing a gun, killing her on the spot, local police said.

Kumari’s case isn’t rare. Every day, about three girls from Pakistan’s marginalised religious minorities are systematically abducted and forced into marriage and religious conversion, according to a UK parliamentary committee that monitors religious freedoms in Pakistan.

But without a law against forced conversions and with languid law enforcement in rural areas where these coercions are common, many girls continue to be targeted despite insistent calls for help from their families and advocates pushing for their safety.

“She informed her parents twice about his attempts. Her father consulted with the local feudal lords to look into the issue to prevent him from harassing her.” The family also complained to the police, who gave Lashari a warning. “In anger, he kept threatening her that he would come after her,” said Oad.

Following Kumari’s murder, politicians with the Sindh United Party, a provincial nationalist political party, are blaming the Sukkur police. “If police had taken preemptive measures, Pooja Kumari might not have suffered death at the hands of her tormentor, because her parents had already indicated to police about the alleged killers,” party president Syed Zain Shah told local press. 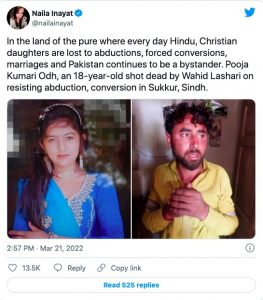 Police have arrested Lashari and the two other suspects. The murder has drawn widespread condemnation on social media, with the hashtag #JusticeforPooja.

An estimated 1,000 religious minority women and girls experience abductions, forced marriage and religious conversions under duress every year in the Muslim-majority country, according to a 2021 report issued by the UK-based All Party Parliamentary Group for Pakistani Minorities. Hindu and Christian women and girls are often the target.

“The perpetrators mainly use the tactics of kidnapping women from their homes, from schools and the streets, after which they disappear for a period of time before they appear in court,” minority rights activist Kapil Dev told VICE World News. While with their captors, the girls may be pressured or brainwashed into converting, and they eventually tell the court they consented to the marriage. “The girl takes the decision to convert under stress – she doesn’t exercise her free will. This is where the issue of consent comes in.”

In many cases, abducted girls are housed in madrassas (Muslim seminaries), which advocates and lawmakers have accused of complicity in holding the girls “hostage” until they submit to their captors’ will. The prominent Sindh-based Dargah Bharchundi Sharif madrassa has denied these accusations, claiming that many young women that came under its care had converted voluntarily.

Muslims account for 97 percent of Pakistan’s population of 220 million, while its Hindu minority make up about two percent. The majority of Pakistan’s Hindu community lives in the country’s Sindh province, where most abductions and forced marriages have been reported.

Islamist political parties have rejected minority lawmakers’ attempts at passing a law against forced religious conversions. In October of 2021, a parliamentary committee rejected one such bill after the Ministry of Religious Affairs opposed it.

“Political parties do not raise this issue because they fear that religious seminaries in their constituencies will revolt against them. So they don’t even talk about it at all,” Lal Chand Malhi, the parliamentary secretary for human rights, told VICE World News.

“There must be a law, there must be a section for forced conversions under which perpetrators are booked,” said Malhi. “Without it, minorities in Pakistan are unsafe.”