Dayton 24/7 Now’s Allison Walker continues her investigation into human sex trafficking and speaks with all parties involved about what’s being done to help immigrant victims out of modern-day slavery.

Tony Talbott, director of Abolition Ohio, an anti-trafficking organization with the University of Dayton, published a sweeping report showing illicit massage parlors are likely the most interconnected criminal enterprise in the world.

“Victims who were at illicit massage businesses are from China. A lot are women from rural China. There are networks of criminals in China that work with networks of Chinese criminals in the United States. They work with other folks as well,” Talbott explained.

The report estimates that 300 parlors are actively enslaving immigrants in Ohio. Traffickers do this by luring impoverished women here with false promises of stable work and the American dream, but instead, they confiscate their documents and force them to have sex with clients. Talbott explained they lure them in primarily using websites like WeChat to advertise positions and get them to the U.S.

“Then there’s another element is financial coercion through debt. So, there are network criminal enterprises that actually profit off of the debt that these women accrue in doing this. So they become basically many of them in a form of indentured servitude, or basically, they have a fraudulent debt that they have to work to pay off,” Talbott said.

Talbott said loopholes in Ohio law allow traffickers to operate with little oversight as no license is needed to open “relaxation parlors,” but H.B. 81, sponsored by Representative Phil Plummer, is hoping to change that.

Captain Terry Ables with the Montgomery County Sheriff’s office, who oversees the Miami Valley Human Trafficking Task Force, said the passage of H.B. 81 would be a game-changer. 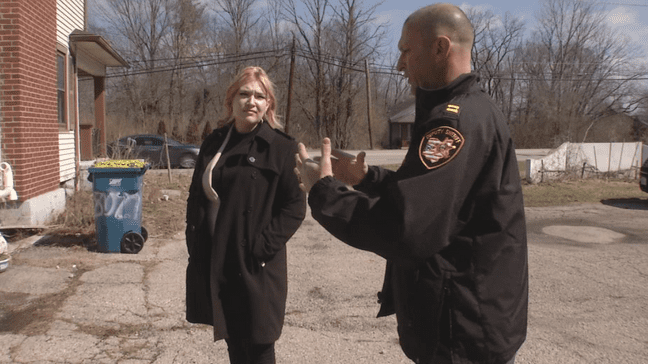 “In our area, we’ve had anywhere from three to six at one time maybe in Montgomery County operating. Our task forces have done a good job of shutting these down, and a lot of them have moved out of the county. There are currently at least two that I know of that we are currently investigating,” Ables said.

Ables said illicit massage parlors often take root in busy strip malls with blacked-out windows and excessive security measures. He brought us to a location in Dayton he recently shut down.

“More often than not, we find that these women are actually living at the massage parlors and not so good conditions. Most of the time, it’s just a makeshift bedroom. The bed maybe a piece of plywood basically being held up by cinder blocks with several blankets, used as a mattress,” Ables said.

Ables added when they execute search warrants for local parlors, they find a lot of paperwork that contains Flushing, NY, and Chicago, IL. He said Flushing is one of the larger human trafficking smuggling ports where Ohio victims come from.

“We’ve seen before where every morning at 5 am, a vanload of people would be shipped in, and that group was gone before we could even get an investigation going within a day or two. So it’s things like that to where people were being shipped all over the United States. they may be in Detroit one day, Dayton one day,” said Montgomery County Sheriff Rob Streck.

The establishment of the victim-informed Miami Valley Human Trafficking Taskforce is putting a dent in the issue by working with county and federal partners to find new ways to track the complex networks.

Yet, Streck said law enforcement shortages make it difficult to keep up with traffickers’ evolving tactics.

“Whether it’s bitcoin or other types of cryptocurrency. So you know, there are all kinds of things that these criminal organizations use to fund everything that they’re doing so it’s a constant challenge between being able to afford training and bodies and technology, it’s just a constant, constant budgetary issue that we have to deal with,” Streck said.

Yet, Talbott added it’s an endless cycle as when illicit massage parlors shut down, traffickers merely reopen them in neighboring counties to elude law enforcement.

Elyse McConnel, the director of family support programs at Asian American Community Services, said they’re just one of two agencies in Ohio that provide Asian language victim advocates and services. McConnel said that three years ago, they began training Asian Services In Action, an organization based out of Cleveland.

“That has been a little taxing because we are a very small staff. Our entire agency is maybe 18 people, and we serve we provide a ton of services on top of crime victim advocacy services. So initially, it was just us. We’re kind of covering the whole 88 counties, and you know, it is very taxing,” McConnel explained.

So, I sat down with Youngbee Dale, CEO of Dale Consulting LLC. She’s a Columbus-based expert victim-witness and police consultant who helped out in the wake of the Atlanta Massage Parlor Shooting. 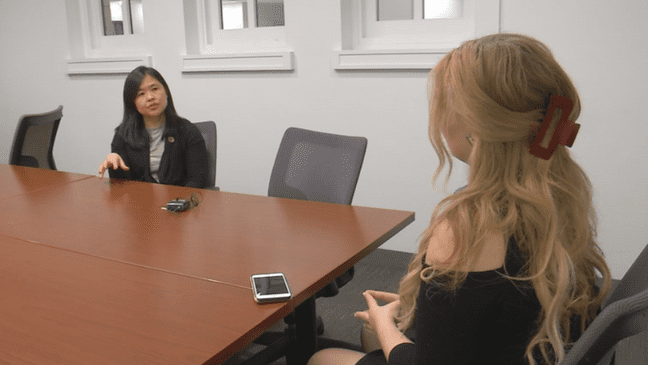 Youngbee Dale, a Columbus-based expert victim-witness and police consultant who helped out in the wake of the Atlanta Massage Parlor Shooting discusses Ohio’s response to illicit massage parlors.

Dale believes this is because a small population of culturally competent providers in Ohio speak the language and understand the issue.

“The problem is the service providers, a lot of time, are not able to extract the right information nationwide because they don’t understand the culture. They don’t speak the language, and also from the law enforcement perspective, they don’t have enough resources to hire a victim advocate who can speak the language and also know what to ask and how to ask the question,” Dale said.

When Walker asked Dale, “How does our state’s response to massage parlors compare to other states across the nation?”

She responded, “I wouldn’t blame the jurisdiction of Ohio for not being able to tackle the problem to the fullest extent. I think it has a lot to do with the misinformation nationwide. We have a poor understanding of the phenomenon. I have yet to see studies done properly, interviewing the traffickers,” Dale said.

The Ohio Attorney General’s Office does not keep track of trafficking convictions specific to the illicit massage parlor industry, but you can review their 2021 human trafficking report using this link. We reached out to Ohio’s Office for Criminal Justice Services, and they said, “ We have not identified any trafficking in persons indictments or convictions related to illicit massage businesses since 2019.”

Dale said traffickers are often not prosecuted to the fullest extent because undocumented victims are too fearful of testifying. She explained having a better grasp of visa fraud and money laundering through real estate is critical for more convictions. Talbott added many intermediaries enable the trafficking, but are rarely held accountable.

Yet it doesn’t address human cost in its wake. While the U.S. government provides undocumented victims a path to citizenship through t-visas, Talbott saids very few are granted. While there are 5,000 t-visa spots annually, the latest data shows only 1,500 victims received protection nationwide.

“There’s still some hesitancy to help immigrants, especially if they originally came into the country and they’re undocumented, or they didn’t come in through legal means. even the fact that it’s not their fault because they were trafficked,” Talbott said.

“Asian hate or minority woman hate if you’re not properly assessing these victims as much as the domestic victims, or Hispanic victims or any other victims. I think that in itself is to hate; right, it’s discrimination,” Dale said.