Regional Brief for the Americas, 2017 Global Estimates of Modern Slavery and Child Labour

Take immediate and effective measures to eradicate forced labour, end modern slavery and human trafficking and secure the prohibition and elimination of the worst forms of child labour, including recruitment and use of child soldiers, and by 2025 end child labour in all its forms.

The 2016 Global Estimates of Child Labour and the 2016 Global Estimates of Modern Slavery chart how far we must still travel to honour these commitments. This brief summarises key results from the global estimates for the Americas region, which includes the countries of Latin America and the Caribbean (LAC), USA and Canada. It also addresses the main regional policy priorities on the road to the 2025 date for ending child labour and the 2030 date for eradicating modern slavery.

The estimates also highlight that: Progress against child labour was significant in Latin America and the Caribbean. Child labour went down in Latin America and the Caribbean (the regional grouping for which there are comparable estimates for 2012) over 2012 to 2016 period (Fig. 2), particularly due to targeted policies implemented by governments in the region to combat child labour. One of the most important advances in this regard has been the reduction of child labour in hazardous activities. It is likely that the advances were also driven in important part by broader economic and demographic forces acting in line with governmental efforts, although this is a matter requiring further research. 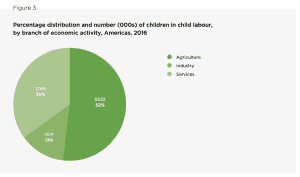 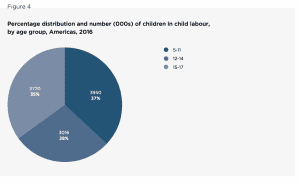 Always on Call:Abuse & Exploitation of Child Domestic Workers in Indonesia
Protecting Children from Online Sexual Exploitation: A Guide for Religious Leaders and Communities
Apple and Google named in US lawsuit over Congolese child cobalt mining deaths
COVID and Human Trafficking -the Amplified Impact on Vulnerable Populations