Workers are seizing the opportunity to protest back-pay, amid nationwide protests

Iran’s labor unions are helping antigovernment protests maintain momentum by calling for strikes at oil facilities, schools and factories, opening another front in the upheaval inside the country.

Authorities in Tehran have responded by monitoring and arresting some workers who go on strike and show up at demonstrations. Organized labor played a key role by paralyzing the economy in the 1979 Islamic Revolution that forced the Shah to abdicate.

Protests sparked by the death of Mahsa Amini, detained for allegedly violating the country’s strict dress code for women, is now entering its second month. Protests have spread to universities, among ethnic minorities along the country’s borders with Iraq and Pakistan and last week to Tehran’s biggest prison complex.

The Iranian government hasn’t commented specifically on the strikes but said the unrest is waning and driven by foreign influence. Iran’s deputy interior minister, Majid Mirahmadi, told state media Saturday the protests were in their “final days.”

In recent days, the protests reignited unrest among workers who have been asking for better pay conditions. Unionized teachers, oil workers and bus drivers have been occasionally striking in recent years as living standards have deteriorated due to economic sanctions placed on Iran and general mismanagement of the country.

Labor groups “have an organization that is one of the more cohesive” in Iranian society, said Sanam Vakil, deputy director of the Middle East-North Africa program at Britain’s Royal Institute of International Affairs, or Chatham House.

On Sunday, teachers started a two-day strike, staging sit-ins at schools to protest the large number of deaths and imprisonment of pupils, many of them during the demonstrations. Earlier this year teachers were seeking pay raises, but their demands are now becoming more political.

“A teacher and a student’s place isn’t in the prison,” said placards brandished by teachers in a school in Saqqez, the town where Ms. Amini was from. On its Telegram channel, the teachers union, which launched the strikes, published pictures of dozens of teachers carrying such signs in empty classrooms throughout Iran.

At least 23 children have died from police violence during the current unrest, according to Amnesty International.

On Saturday, crowds of workers gathered at the Aydin chocolate factory in Tabriz, Western Iran, and chanted antigovernment slogans, according to footage posted on social media.

Strikes have also taken place at a sugar cane plant near the Iraqi border and at one of the country’s largest steel complexes in the south, according to the Free Union of Iranian Workers. Last week, tanker truckers at Abadan said they were also joining a burgeoning movement at the facility, according to the Free Union, which represents the main independent trade unions in the country. An oil manager said the unrest at the facility had reduced supplies of asphalt and fuel oil, citing internal reports that showed stockpiles building up to abnormal levels at the facility.

Atena Daemi, a human-rights activist in Tehran, said oil workers at a petrochemical complex in the country’s oil-rich south were increasingly targeted by security forces.

On Saturday, managers at a state-run oil company in Tehran were summoned and told their employees were being monitored for supporting the demonstrations, according to a person who was present. “Tell your staff: ‘Don’t go to protests,’ said the company’s president, as a government intelligence agent stood by, the person said. “We are monitoring you both physically and online.”

Still, calls by unions to carry out a nationwide strike haven’t been heeded so far as workers are often fighting for distinct demands and are divided by linguistic and regional differences. 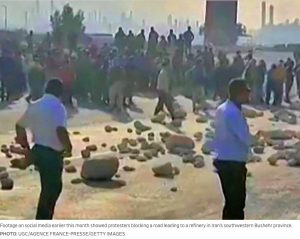 The strikes have yet to threaten Iran’s economy. The unrest could turn into a significant threat for the government if day laborers and public servants join them. The movement will become a significant challenge if it proves “devastating economically and infrastructure starts breaking,” Chatham House’s Ms. Vakil said.

Most of the labor strikes remain focused on longstanding demands over pensions, pay and layoffs. But Iran experts say they pose an additional challenge to the regime’s grip on its population. The strikes highlights “the fact that the unrest is not just about personal freedom, but also poverty,” said Mostafa Pakzad, a Tehran-based consultant who advises foreign companies trading with Iran. The threats the strikes pose to the economy “are a critical complement to the uprising since they pressurize the authorities from an awkward angle: working class people who are traditionally religious and pro-regime.”

Write to Benoit Faucon at benoit.faucon@wsj.com