In Afghanistan, a Booming Kidney Trade Preys on the Poor

Widespread poverty and an ambitious private hospital are helping to fuel an illegal market — a portal to new misery for the country’s most vulnerable.

HERAT, Afghanistan — Amid the bustle of beggars and patients outside the crowded hospital here, there are sellers and buyers, casting wary eyes at one another: The poor, seeking cash for their vital organs, and the gravely ill or their surrogates, looking to buy.

The illegal kidney business is booming in the western city of Herat, fueled by sprawling slums, the surrounding land’s poverty and unending war, an entrepreneurial hospital that advertises itself as the country’s first kidney transplantation center, and officials and doctors who turn a blind eye to organ trafficking.

In Afghanistan, as in most countries, the sale and purchase of organs is illegal, and so is the implanting of purchased organs by physicians. But the practice remains a worldwide problem, particularly when it comes to kidneys, since most donors can live with just one.

“These people, they need the money,” said Ahmed Zain Faqiri, a teacher seeking a kidney for his gravely ill father outside Loqman Hakim Hospital. He was eyed uneasily by a strapping young farmer, Haleem Ahmad, 21, who had heard of the kidney market and was looking to sell after his harvest had failed.

The consequences will be grim for him. For the impoverished kidney sellers who recover in frigid, unlit Herat apartments of peeling paint and concrete floors, temporarily delivered from crushing debt but too weak to work, in pain and unable to afford medication, the deal is a portal to new misery. In one such dwelling, a half-sack of flour and a modest container of rice was the only food last week for a family with eight children.

For Loqman Hakim Hospital, transplants are big business. Officials boast it has performed more than 1,000 kidney transplants in five years, drawing in patients from all over Afghanistan and the global Afghan diaspora. It offers them bargain-basement operations at one-twentieth the cost of such procedures in the United States, in a city with a seemingly unending supply of fresh organs.

Asked if the hospital made good money from the operations, Masood Ghafoori, a senior finance manager, said: “You could say that.”

The hospital handles the removal, transplant and initial recovery of both patients, without asking questions. Sellers say their hospital fees are covered by the buyers, and after a few days in the recovery ward, they are sent home.

How the organ recipient gets the donor to agree to the procedure is not the hospital’s concern, the doctors say.

Dr. Ejaz at first contended that more than a dozen impoverished Herat residents were lying when they told The Times of selling their kidneys for cash. Later, he conceded that “maybe” they were not. Interviews with other health officials here followed the same arc: initial denials, followed by grudging acknowledgment.

“In Afghanistan everything has a value, except human life,” said Dr. Mahdi Hadid, a member of Herat’s provincial council.

Accounts of organ selling date back to the 1980s in India, according to the United Nations, and today the practice accounts for roughly 10 percent of all global transplants. Iran, less than 80 miles from Herat, is the only country where selling kidneys is not illegal, as long as the parties are Iranian.

“There’s always a gap between international guidelines and what governments do in practice,” said Asif Efrat, a faculty member at the Interdisciplinary Center Herzliya, a university in Israel, pointing out that Afghanistan is a new player compared to the countries where the organ trade is most prolific: China, Pakistan, and the Philippines. “The current international consensus is on the side of prohibiting, but governments have incentives not to follow it,” he said.

The moral scruples that keep the business underground elsewhere are hardly evident in Herat. Dr. Ejaz and health officials point to poverty’s harsh logic. “The people of Afghanistan sell their sons and daughters for money. How can you compare that to selling kidneys?” he asked. “We have to do this because someone is dying.”

Dr. Ejaz seemed unfazed when shown the business card of a kidney “broker,” saying, “In Afghanistan you find business cards for people to assassinate others.”

On the fourth floor of the hospital, three out of four patients in recovery said they had bought their kidneys. 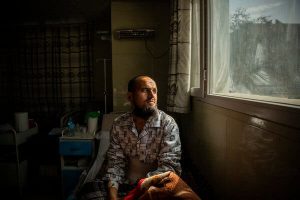 “If there is consent, Islam has no problem with it,” Gulabuddin said.

Dr. Abdul Hakim Tamanna, Herat Province’s public health director, acknowledged the rise of the kidney black market in Afghanistan, but said there was little the government could do.

“Unfortunately, this is common in poor countries,” he said. “There’s a lack of rule of law, and a lack of regulation surrounding this process.”

Afghanistan’s poverty rate was expected to reach over 70 percent in 2020, according to the World Bank, and the country remains largely dependent on foreign aid; domestic revenues finance only about half the government budget. Without any substantive public safety net, health care is just another opportunity to exploit the country’s most vulnerable.

Deep inside the warren of sandy streets in Herat’s slums, Mir Gul Ataye, 28, regrets every second of his decision to sell his kidney. A construction worker who had earned up to $5 a day before his operation last November, he is now unable to lift more than 10 pounds, and barely that.

“I’m in pain, and weak,” he said. “I’ve been sick, and I can’t control my pee.” Four children huddled in front of him on the concrete floor in the bare unlit room. He said he supports 13 family members in all, and had accumulated some $4,000 of debt.

“It was difficult, but I had no choice. Nobody wants to give up a part of his body to someone else,” he said. “It was very shameful for me.”

For his kidney, Mr. Ataye received $3,800. That was barely three months ago. He is still in debt, unable to pay his rent or his electricity bill.

He said he feels “sadness, desperation, anger and loneliness.” One night he was in such severe pain, he banged his head against the wall and fractured his skull.

Others around Herat cited similar reasons for selling a kidney: outstanding debt, sick parents, a marriage that would otherwise have been unaffordable.

“My father would have died if we had not sold,” said Jamila Jamshidi, 25, sitting on the floor across from her brother, Omid, 18, in a frigid apartment near the city’s edge. Both had sold their kidneys — she, five years ago, and he, one year ago — and both were weak and in pain.

At a mud-walled camp just outside Herat, a vortex of sun, wind and dust filled with war refugees from other provinces, Mohammed Zaman, a tribal elder in a white turban, spoke of the irresistible attraction of Loqman Hakim’s kidney operation. More than 20 from his village, now chased from their homes, had sold their kidneys.

At a local restaurant, five brothers spoke of being forced off their land in Badghis Province by constant Taliban attacks. In Herat, all had sold their kidneys. The youngest was 18, the oldest 32.

“We had no choice,” said Abdul Samir, one of the brothers. “We were forced to sell. Otherwise, we would not have sold a fingernail.”

CBP Modifies Withhold Release Order on Gold Imports from the Democratic Republic of the Congo
How many Ukrainian refugees have been trafficked? We won’t know for years.
Models of Care for Trafficking Survivors in Thailand
Nepal: Multi-Country Study on Trafficking in Persons and Migrant Smuggling