How corporations buy—and sell—food made with prison labor

In 2011, Leprino Foods, the $3 billion company that supplies all the mozzarella to Papa John’s, Pizza Hut, and Domino’s pizza chains, lost its buffalo milk supplier in India.

Water buffalo milk isn’t easy to find in the United States, especially not as much as a company as big as Denver-based Leprino could use. The animals are finicky, sometimes refusing to give milk at the sight of a stranger, and they produce only a fraction of the milk that cows make.

But Leprino was in luck: One of its existing suppliers, which soon became one of the largest buffalo dairies in the United States, agreed to step in, and the milk began to flow. Leprino trademarked the slogan “with a kiss of buffalo milk” for Bacio, its premium mozzarella line marketed to independent pizzerias. Yet something seemed amiss, according to pizza cheese enthusiasts who frequented online forums: Where was Bacio getting the buffalo milk, and how much was it actually using?

The answer to the first question, it turned out, may have been the Colorado prison system, where incarcerated people working for the state’s correctional industries earn an average of $4.50 per day. Leprino was the only buyer of Colorado Correctional Industries’ buffalo milk between 2017 and 2020, purchasing more than 600 tons at an average price of $1.19 per pound, according to public records obtained by The Counter. (The records did not include sales from previous years, and the company did not respond to interview requests.) An independent buffalo dairy told The Counter it had sold small quantities of the same product for more than double the price Leprino paid. 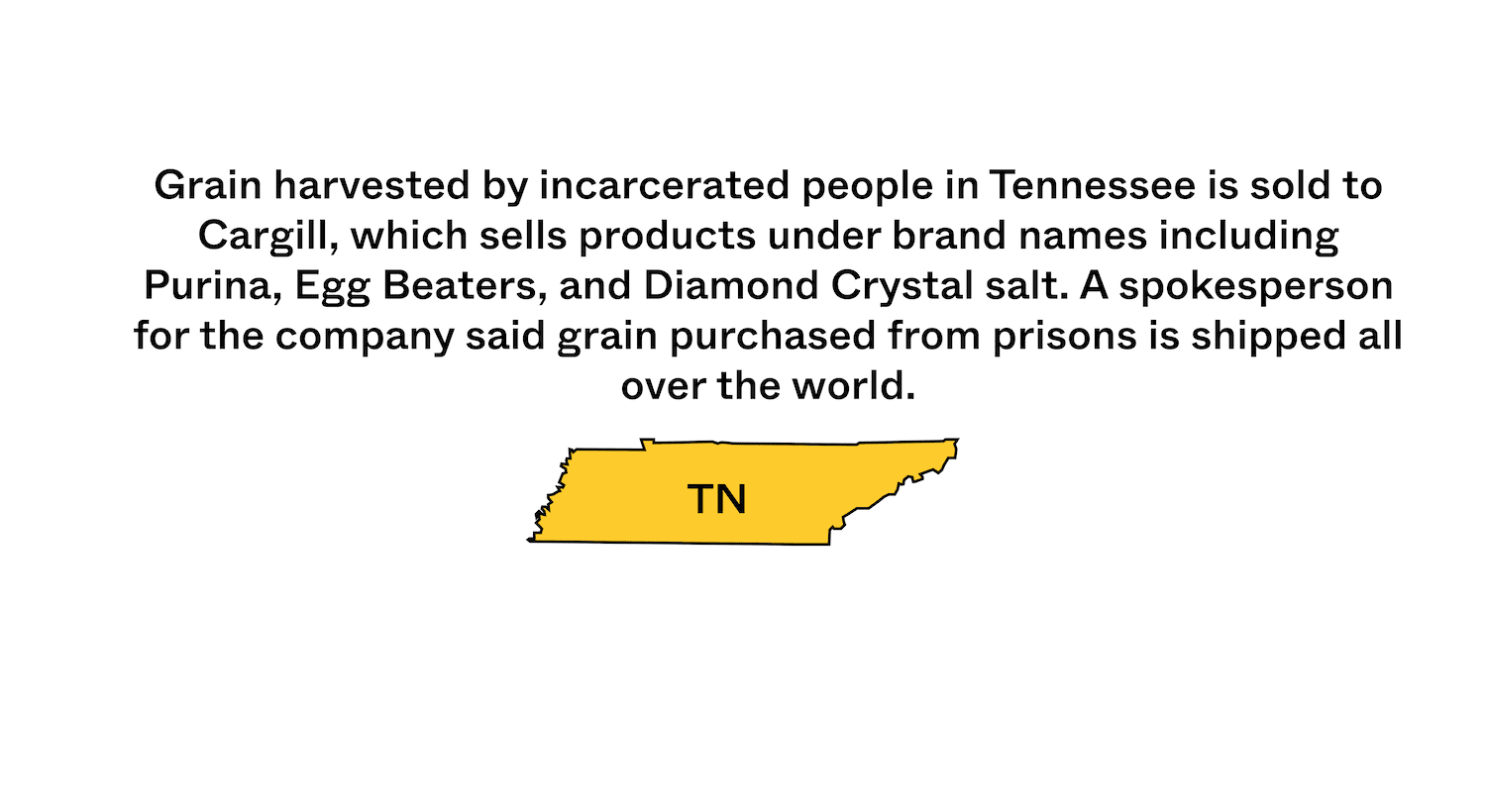 Leprino was able to gain a competitive edge—access to an ingredient that’s difficult to source—by partnering with Colorado Correctional Industries (CCi). Had they known about the partnership, its customers (and their customers, the pizza-eating denizens of the United States) may have chosen to avoid the company’s cheese, whether out of a desire not to support the prison system or a belief that their food dollars should go toward companies whose workers earn living wages. But they probably never found out about the relationship: Prisons don’t generally publish the names of the companies that purchase the food they produce.

The Counter identified over $40 million in transactions between private food companies, prisons, and prison industries since 2017, including sales to major food industry players like Cargill and the Dairy Farmers of America. Across the country, at least 650 correctional institutions have some sort of food processing, landscaping, or farming operation, according to research by sociologist Joshua Sbicca and feminist geographer-political ecologist Carrie Chennault at Colorado State University.

In some states, food produced in prisons makes its way into restaurants and grocery stores through companies like Leprino, though in most places, food produced on prison grounds feeds the prison system and the public sector. Elsewhere, private food companies contract with state correctional industries to hire incarcerated workers, often for meager pay. In some ways, the small world of prison food production is a microcosm of the American food system, which has roots in slave labor and all too often functions as a race to the bottom: Fueled in part by cheap labor and low overhead, the drive toward production and profit leaves behind the people who plant the seeds and butcher the beef.

This article is the first of a three-part series on food production in the nation’s prisons and will focus on prison sales to private businesses. The next stories will focus on sales within the public sector and, then, working conditions and wages in prison jobs.

The notion of work as punishment has enabled prison administrators to compel incarcerated people to work on farms and in dairies for low or no pay and without basic labor protections, sometimes in service of secretive billionaires they’ll never meet. Not unlike undocumented immigrant farm workers who fear advocating for better pay and working conditions might lead to deportation, people who work in U.S. prisons have little power to make things better.

The buyers: A dairy conglomerate, gourmet steak producers, and a tropical-fish supplier. Plus, an extraordinary Covid workaround.

Leprino is far from the only food business that purchases ingredients from prisons. Dairy Farmers of America, the conglomerate that markets about 30 percent of the raw milk produced in the United States and manufactures brands including Borden, T.G. Lee, Plugrá, and Breakstone’s butter, purchased more than $10.5 million worth of milk from prisons in Colorado and South Carolina from 2017 to 2020. Until months ago, incarcerated people in Ohio carved beef for a company that sells its Wagyu steak at gourmet retailer Balducci’s, as well as for several local farms and ranches. People in Colorado prisons have grown grapes for an award-winning winery, while those imprisoned in Arizona have worked in food manufacturing facilities that supply pre-made salads for companies that serve major retailers such as Walmart, Kroger, and Ralph’s. And in Louisiana, prison-raised cattle are sold on the open market at auction.

It’s generally illegal to sell prison-manufactured goods across state lines except through one small federal program. But that rule has long included an exception for agricultural goods. Today, the loophole has mushroomed into a multimillion-dollar industry, a quiet set of business relationships that slip prison-grown food products into restaurant menus and onto supermarket shelves undetected. Someone imprisoned in Arizona might work at a canning plant that produces taco sauce sold at Safeway and on Amazon, but the jar doesn’t come with a “packaged in prison” label or other disclosure.

In some cases, the trail goes cold long before it’s possible to link prison food buyers with the retailers and restaurants they later supply. A single distributor, Tropaquatics, Inc., buys virtually all the prison-farmed tilapia from both Colorado and Wyoming, totaling more than $650,000 in purchases over the last three years. Yet the company advertises itself primarily as a pet fish supplier, and owner Larry Heimlicher declined to disclose his retail customers, saying only that they included “ethnic supermarkets,” and that he is ending his relationship with CCi. The corporations that purchase food produced in prison may not even know where it winds up: “In terms of tracing that grain, crops from Tennessee are commingled with grain from other locations and loaded onto vessels at various export terminals to ship to locations all over the world,” a spokesperson for Cargill wrote in an email, adding that grains produced from Tennessee prisons make up a “very small amount” of the company’s total U.S. volume. 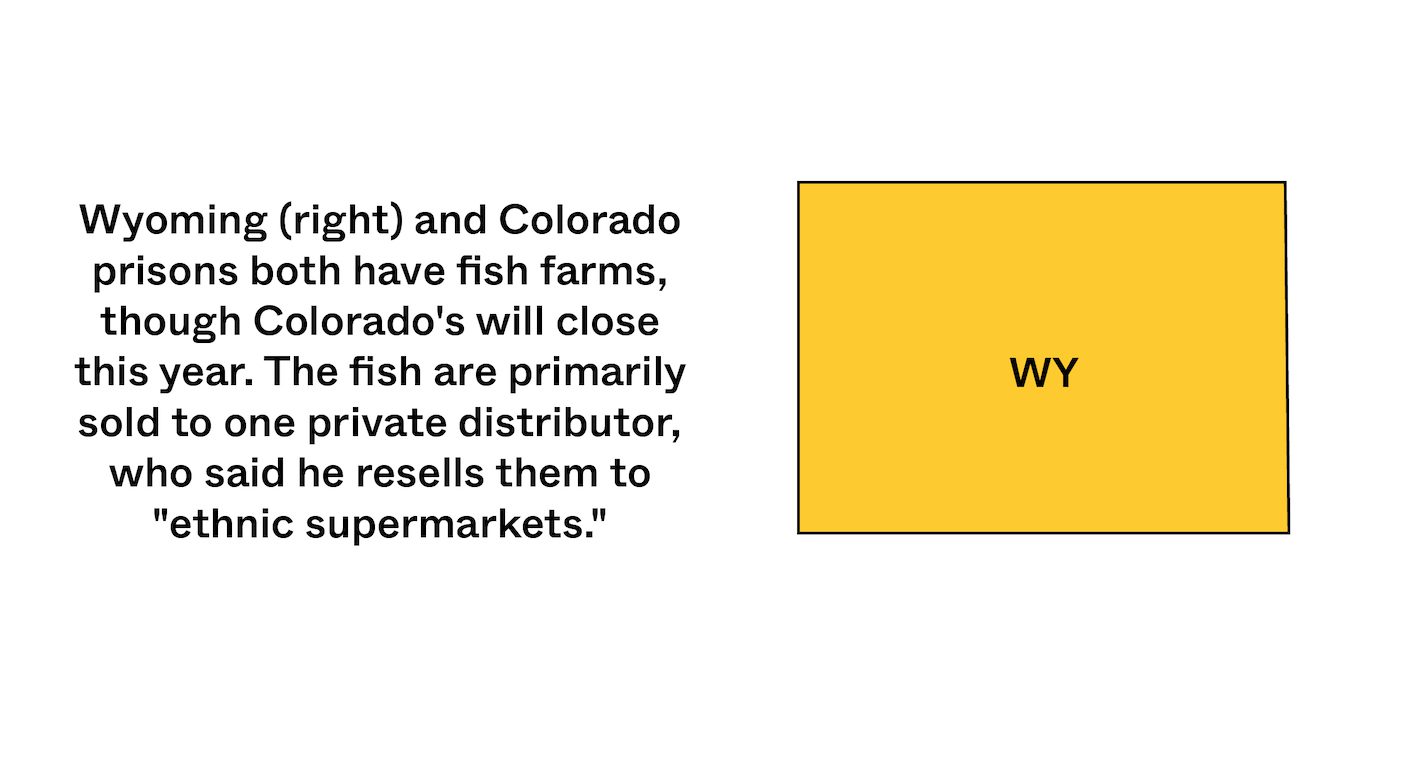 Lucrative business relationships can set up incentive structures that encourage prison management to put clients’ needs above incarcerated people’s health. In March 2020, as the Arizona Department of Corrections, Rehabilitation and Reentry swiftly shut down its off-site labor partnerships to prevent the spread of Covid-19, its biggest customer, egg producer Hickman’s Family Farms (a relationship that brought in $7 million in fiscal year 2020), balked at the prospect of losing many of its workers. The company argued in a letter that it should be allowed to continue using such labor throughout the pandemic, claiming its egg processing operations counted as “critical operations.”

The Arizona Department of Corrections granted Hickman’s an extraordinary exception: It agreed to allow the egg company to continue to employ 140 incarcerated women throughout the public health emergency, going so far as to let Hickman’s house them onsite in a 6,000-foot warehouse. Arizona Correctional Industries even built and delivered bunk beds for the makeshift housing. By the summer, at least five residents had contracted Covid-19.

Spotlight on Labor Migration in Asia: A factor analysis study
Briefing for UK business leaders: Impact of the Covid-19 pandemic on modern slavery
GRETA issues Guidance Note on addressing the risks of trafficking in human beings related to the war...
A Dirty Investment: European Development Banks’ Link to Abuses in the Democratic Republic of Congo's...