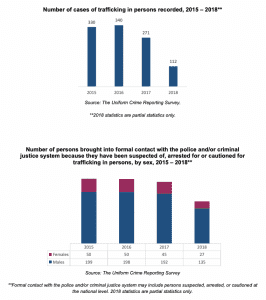 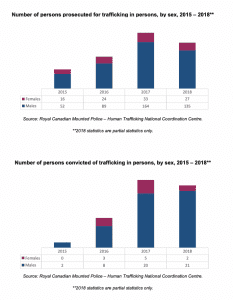 The Royal Canadian Mounted Police – Human Trafficking National Coordination Centre did not report on the citizenships of persons convicted of trafficking for 2017 and 2018. Prior to 2017, authorities reported that the majority convicted were Canadian nationals. 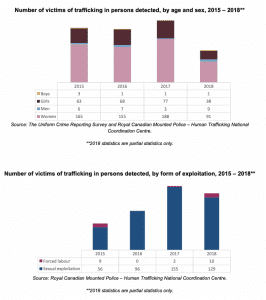 The Royal Canadian Mounted Police – Human Trafficking National Coordination Centre did not report on the citizenships of victims of trafficking in persons detected for 2017 and 2018. Between 2014 and 2017, authorities reported that the majority of detected victims were Canadian nationals with small numbers of persons originating from Asia, Central America, and the Caribbean. In 2017, Canadian authorities reported 157 Canadian national victims trafficked domestically, and in 2018 reported 139. 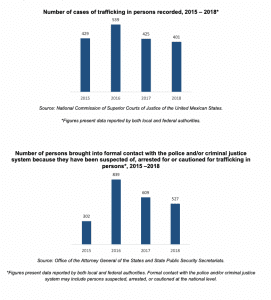 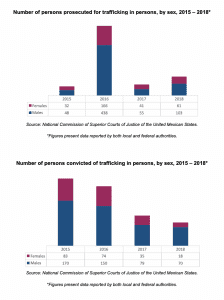 Source: National Commission of Superior Courts of Justice of the United Mexican States. 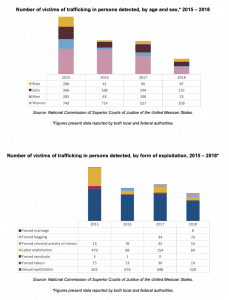 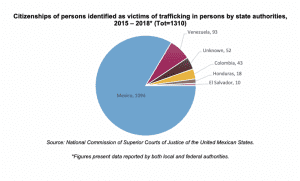 Source: National Commission of Superior Courts of Justice of the United Mexican States.

The current legislation on trafficking in persons in the United States of America covers sex trafficking and forced labour.

The Departments of Justice (DOJ), Homeland Security (DHS), and State (DOS) are the primary investigating agencies for federal trafficking offenses. While the Federal Bureau of Investigation (FBI) collects data on state and local human trafficking investigations, not all jurisdictions participate. In 2018, participating state and local jurisdictions reported a total of 548 human trafficking offences resulting in arrest or solved for crime reporting purposes, 545 in 2017, and 654 in 2016. There is no other formal mechanism to track prosecutions at the state and local levels. 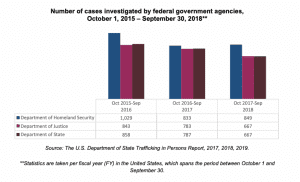 Source: Department of Labor Office for the Inspector General 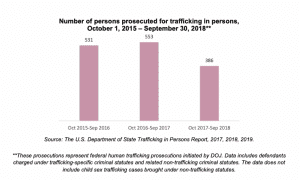 The number of persons prosecuted for trafficking in persons does not correlate to the number of cases prosecuted as there may have been multiple defendants in a case. In 2016, DOJ brought 241 prosecutions, 282 in 2017, and 230 in 2018. 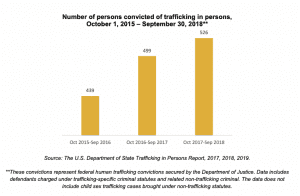 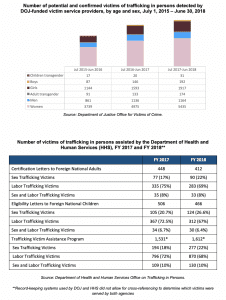 The Department of Health and Human Services (HHS) issued Certification and Eligibility Letters denoting the eligibility of foreign national victims for services and benefits to the same extent as refugees, provided grant funding for comprehensive case management for foreign national and domestic trafficking victims, and funded capacity-building grants for community-based organizations and child welfare systems to respond to trafficking. In FY 2017, HHS issued 954 Certification and Eligibility Letters and 878 in FY 2018. In FY 2018, 1,612 foreign national victims of trafficking and qualified family members and 1,149 domestic victims of trafficking received case management service through HHS’ grant-funded anti-trafficking programs. 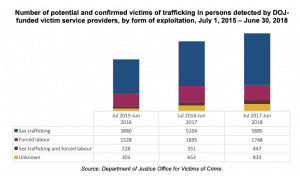 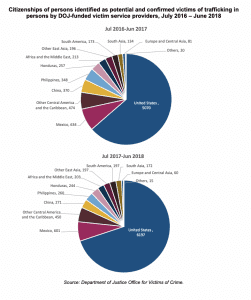 Source: The U.S. Department of State Trafficking in Persons Report, 2019.