Outside prison gates in Yangon, Myanmar

This executive summary includes extracts from the full report published in English. Global Prison Trends is Penal Reform International’s annual flagship publication (since 2015), published in partnership with the Thailand Institute of Justice. The report provides insights and analysis on recent developments and challenges in criminal justice, prison policy and practice.

The 2022 edition includes analysis on:

Prison populations, and issues for people belonging to specific groups in custodial settings

Each year, Penal Reform International (PRI) and the Thailand Institute of Justice (TIJ) publish our joint Global Prison Trends report to share information and analysis on key trends and developments in prisons. This year in our 8th edition of Global Prison Trends, we continue to document the trends in the use of imprisonment, changes and issues faced by people belonging to certain – and often vulnerable – segments of prison populations, as well as prison management and the use of technologies.

For the first time, Global Prison Trends includes a dedicated chapter on prison health. Against the backdrop of the ongoing COVID-19 pandemic, this is in recognition that prison healthcare needs greater attention and that it is distinct from prison management. We also have shifted away from a longer Special Focus section to featuring a ‘Spotlight’ on a number of issues, allowing us to highlight a broader range of key trends and challenges facing prisons and those detained in them.

With the dearth of data in many prison systems, Global Prison Trends is pivotal in bringing to light the information that is available to identify and highlight key trends affecting the 11.5 million people in prisons worldwide. Data and information are critical in the global struggles facing societies, especially in managing crises as seen with the COVID-19 pandemic or as conflict breaks out. Data is also vital in challenging exclusion, realising human rights of those most left behind and keeping governments true to their commitments under the 2030 Agenda for Sustainable Development.

As the global prison population rises year-on-year, we see the need for stronger action to reform policies and laws that drive this growth. These outdated policies and laws counter both longstanding and recent commitments to reduce imprisonment and implement rehabilitative-focused criminal justice systems. For example, the first ever United Nations System Common Position on Incarceration states unequivocally the negative impact of using imprisonment as the ‘default’, including the ‘acute’ crisis of overcrowding.

Expanding the capacity of prisons – a trend that we detail in this year’s report – is not a viable, long-term solution to reducing overcrowding and the devastating consequences of imprisonment on individuals and societies. Instead, we need an expansion in the availability and use of non-custodial sanctions and measures that are true alternatives to imprisonment – and not supplementary or net-widening – coupled with decriminalisation and depenalisation of certain offences, in line with the UN Tokyo Rules and the UN Bangkok Rules.

We continue to publish Global Prison Trends as a resource, a tool and a reference for policymakers, practitioners and academics, and to support and inspire penal reform activists and human rights defenders, including civil society actors.

Civil society organisations and institutions like PRI and TIJ remain at the centre of reform efforts. In fact, many examples of initiatives and research by civil society is drawn on for Global Prison Trends. Shrinking spaces for civil society and a lack of funding for human rights work are key challenges that need to be tackled. Many NGOs monitor prisons, provide life-saving services to people in criminal justice systems, and their work needs to be recognised and supported. 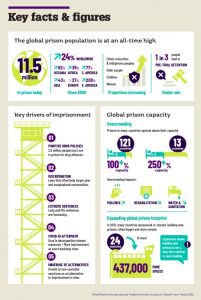 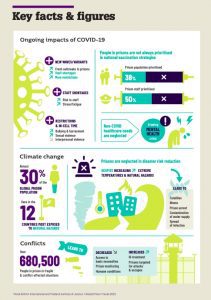 More than 11.5 million people are estimated to be in prison globally – the highest ever, and a 24% increase since 2000 (a rate slightly less than the estimated growth in the world’s general population). Prison overcrowding remains at critical levels in some countries, with prisons operating above official capacity in 121 countries.

Release measures to decongest prisons, seen particularly in the early stages of the COVID-19 pandemic, have largely been abandoned. Much of the fluctuation in national prison populations over the course of the pandemic has been due to reduced court operations resulting in fewer admissions to prisons. As court backlogs are cleared, prison numbers have risen again, beyond pre-pandemic levels in some places.

Rising prison populations and overcrowding has triggered investment in new or expanded facilities. In 2021, at least 24 countries announced plans for, or started construction of, new prison facilities – in total, creating about 437,000 more spaces worldwide. Turkey accounts for more than half of this number and Sri Lanka one fifth, with both countries moving towards massive prison complexes. Where information on the size and location of new prisons is available, there is a general trend towards increased scale as well as geographical remoteness.

04 Rates of pre-trial detention have not changed, indicating little progress in achieving SDG 16

Around 1 in 3 people in prison globally is held in pre-trial detention, without having been convicted or sentenced. The global share of people in pre-trial detention has remained stable since 2000, ranging between 29% and 31% of the global prison population, demonstrating little progress in achieving target 16.3 of the UN 2030 Sustainable Development Agenda to ensure equal access to justice for all – under which one indicator is the proportion of pre-trial detainees in prisons.

05 The growth of non-custodial sanctions is incredibly slow, despite promising use and expansion during the pandemic

Although non-custodial alternatives to imprisonment are widely available, in practice they remain enormously underutilised. Analysis also shows that community sanctions and measures are not always used as an alternative to imprisonment, but as a supplement, and that violations of conditions contribute to growing prison populations.

07 Women and children make up growing shares of prison populations

People from minority and indigenous communities continue to make up a disproportionate share of prison populations, and experience discrimination across all parts of prison regimes. Action has stepped up at the UN in the past year on racial justice and equality in criminal justice systems.

Out of the 131 countries for which vaccination plans or other resources could be found, only 56 (43%) explicitly mention people in prison, showing that people in prison were not recognised as an at-risk or priority group.

10 The mental health crisis in prisons is being ignored

Mental health conditions remain disproportionately high among prison populations, and data suggests they are rising. New evidence points to the significant impact of COVID-19 restrictions in prisons on mental health, exacerbating the crisis. Yet, a lack of investment and attention means there is a dire lack of qualified mental health staff or services in a large proportion of prisons globally.

109 countries worldwide have formally abolished the death penalty and, according to the UN, 170 have either abolished or do not practice it. However, a number of retentionist countries resumed executions or used capital punishment with renewed vigour in 2021, after a slowdown in 2020. At least 131 people were executed for drug offences in 2021, a 336% increase compared to 2020.

13 Use of life sentences is on the rise, with increased punitiveness

In many countries, there is an upward trend in the number of life sentences imposed, their length, conditions and the types of offences that can attract a life sentence. The most recent data (2019) estimates almost half a million people are serving a formal life sentence, while the number serving a ‘de facto’ life sentence remains unknown.

14 Torture and high levels of violence plague many prison systems

Prisons remain violent places, with regular reports of torture and excessive use of force against people in prison in all regions of the world. Certain people including women, children, LGBTQ+ persons and people newly arrived in prison face increased risk of violence from detainees and staff.

15 Prisons are left behind in disaster-risk responses in the face of changing climate conditions, extreme temperatures and hazards

Prisons are rarely accounted for in hazard-risk management, mitigation plans or disaster responses. As extreme weather conditions and natural hazards increase, people in prison and staff are impacted – in some cases fatally. Common knock-on effects include a lack of critical infrastructure such as water, prison unrest, escapes and being cut off from the outside world.

Prisons in fragile and conflict-affected settings continue to lack basic material needs and have high rates of torture and ill-treatment. Prisons have also become targets in conflicts over the past year.

17 Staff shortages continue and have worsened in some prisons, not least due to COVID-19

The pandemic has brought additional challenges to ensuring adequate levels of prison staffing due to infection and isolation rules in a number of countries, as well as the impact of vaccine mandates. This impacts safety, healthcare, rehabilitation programmes and daily regimes in prisons.

Many prisons across all regions are seeking to increase access to the Internet and equip people in prison with digital literacy skills, recognising the central role of digital technology in navigating life outside prison.