Child asylum seekers are going missing from Home Office hotels after being left at risk of exploitation and human trafficking, charities have warned.

They are disappearing at a rate of one a week, data obtained by The Independent and other organisations shows, and the whereabouts of dozens of vulnerable teenagers is unknown.

An open letter signed by 60 charities and campaigners said children as young as 11 had gone missing, adding: “Our concern for these children cannot be overstated.

“Already vulnerable, separated and traumatised, isolated from family support networks, they are at the greatest risk of exploitation and trafficking.

“Some may have already been trafficked and are at significant risk of being re-trafficked. They need – and are entitled to – care in supportive foster or residential homes, with skilled professionals to help them recover in safety.”

A freedom of information request by the Every Child Protected Against Trafficking (Ecpat) charity showed that 45 unaccompanied child asylum seekers went missing from hotels between June last year and the end of March, while a separate request by The Independent showed the figure was 16 from July and November last year.

The Home Office dramatically increased its use of hotels as temporary accommodation for asylum seekers at the start of the Covid pandemic, and again for the influx of refugees from Afghanistan and Ukraine.

As of the end of June, 355 unaccompanied child asylum seekers between the ages of 11 and 18 were being kept in hotels.

The open letter, written by Ecpat and Children England and signed by groups including the Refugee Council and Asylum Aid, called the arrangements an “unofficial shadow system in which children, as the data now shows, may disappear from sight”.

“Action is urgently needed,” it added. “Use of Home Office hotel accommodation must cease and central government must invest in proper care for children, so that local authorities can accept and support every child who arrives on our shores without a parent or guardian, as the law dictates.”

It came after a report by the UN Refugee Agency and British Red Cross warned that lengthy delays in asylum decisions were causing people to “take up offers of work in unsafe and exploitative conditions”.

It found evidence of “visible, large-scale accommodation in hostels, hotels and houses of multiple occupancy being targeted by traffickers”.

The Home Affairs Committee also expressed concern in a recent report that said “urgent measures” to prevent exploitation were required, and that soaring waits for government decisions – some 550 days on average for child asylum applications – were a “major factor driving the decisions of asylum seekers to leave a life in limbo by acting for themselves”. 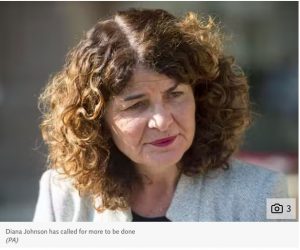 Addressing parliament last month, committee chair Dame Diana Johnson said: “The practice of placing unaccompanied children in hotels has resulted in an unknown number of children disappearing either temporarily or, in some cases, permanently.

“We recommend that the government confirm urgently who is responsible for safeguarding these children and tell us what they are doing to prevent children, alone and potentially vulnerable, simply vanishing from sight into unknown hands and unknown futures.”

A separate report by the Independent Chief Inspector of Borders and Immigration found that failures in the processing of migrants arriving on small boats meant that children and trafficking victims were not always being correctly identified and given the right support. 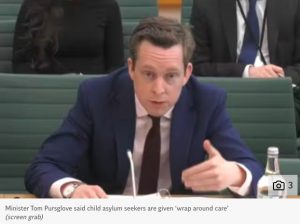 “The absconding of migrants, vulnerable and otherwise, remained an issue in early 2022,” it added.

A 2021 report by HM Inspectorate of Prisons found that some child asylum seekers had accidentally been sent to adult detention facilities. It also said social worker interviews were not always happening and children were being sent alone in taxis to accommodation.

The Home Office ordered councils to participate in a previously voluntary scheme to offer care placements across the country, after Kent County Council said it had no more capacity to look after them, but said hotels were still being used “out of necessity” on a temporary basis.

Responding to a parliamentary question in June, minister Tom Pursglove said unaccompanied child asylum seekers spend 15.5 days in hotels on average before moving on, and were “supported with wrap-around care, including from professional care workers, social workers, and nurses”.

He added that the Home Office has sole occupancy of the hotels used for lone children, and that no other guests can stay there.

A government spokesperson said: “Due to the ongoing and significant surge in arrivals of migrants using dangerous and unsafe methods to enter the UK, we are facing unprecedented levels of demand on hotel accommodation for unaccompanied asylum-seeking children.

“Any child going missing is extremely serious, which is why we work closely with local authorities and the police to operate robust missing persons protocols to ensure their whereabouts are known and that they are safe.

“We work to ensure vulnerable children are provided with appropriate placements for their needs.”