Miners fill bags with cobalt ore at the depot of the Kasulo mine in the Democratic Republic of Congo. Cobalt demand has been skyrocketing amid global efforts to transition to low-carbon energy.
Source: Sebastian Meyer/Corbis News via Getty Images

Mounting demand for cobalt has multinational mining companies restarting and expanding mines in the Democratic Republic of Congo, where reports of human rights abuses persist.

Mining giants operating in the region say they have made efforts to ensure their products are free of human rights abuses in the years following a 2016 Amnesty International report on child labor and forced labor within the DRC’s cobalt mining sector. Cobalt is a metal used in many of the rechargeable batteries crucial for the low-carbon energy transition and demand has been skyrocketing in recent years, resulting in efforts to expand DRC mining operations.

At the same time, mining companies have tried to allay concerns from investor activists and customers unwilling to be a party to the kinds of human rights violations documented by watchdog groups. At least some cobalt buyers appear to be appeased by the actions of the biggest miners, even as they have avoided small-scale mining companies at the heart of last decade’s scandal.

Even the largest miners have come under renewed scrutiny, such as Swiss mining giant Glencore PLC and Chinese mining company China Molybdenum Co. Ltd. A report issued in late 2021 by a pair of watchdog groups called out the bigger mining companies for low pay, limited healthcare and discrimination. The companies said they are adhering closely to international standards, and promise they treat their Congolese workers fairly.

“As always, cobalt comes with a variety of challenges,” said Adam McCarthy, president of the Cobalt Institute, a trade association representing cobalt companies, including the largest multinational companies operating in the DRC. “What we see is that members do follow local labor requirements, rules and regulations, and in doing so, enforce those regulations on their sites.” 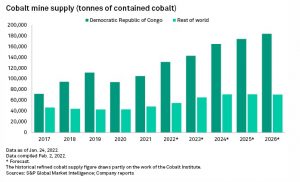 The world’s leading cobalt producer, Congo is forecast to drive a 79.4% increase of the world’s mined cobalt supply in 2022, producing about 131,262 tonnes, according to S&P Global Market Intelligence analysis.

Market Intelligence analysts forecast a global cobalt supply deficit could grow to 15,000 tonnes in 2026 from 8,000 tonnes in 2022, with demand heating up from the electric vehicle sector. About 71.5% of the increase in cobalt demand between 2021 and 2026 will come from passenger plug-in EVs. Mining companies seek to meet that demand with the most economic and readily available cobalt they can find: the resources in Congo.

“In terms of the vast volume increases in cobalt that are going to be needed for electrification, you’re really dependent on the DRC,” Caspar Rawles, chief data officer at Benchmark Mineral Intelligence and cobalt expert, said in an interview.

Glencore’s Mutanda mine has been undergoing a staged restart and the company said it will produce 10,000 tonnes of cobalt in 2022. Market Intelligence analysts expect the mine to be the No. 3 top-producing cobalt mine in the world by 2025. China Molybdenum is expanding its Tenke Fungurume operation, announcing in August 2021 that it would invest $2.51 billion in the mine to increase annual cobalt production by 17,000 tonnes, making it the No. 1 top producing cobalt mine by 2025. Other companies including Jinchuan Group International Resources Co. Ltd. and Shalina Resources Ltd. also plan to increase cobalt production this decade in Congo.

“We are seeing increases in both investment and production with DRC,” McCarthy said. “We’ve seen some of our members reopening facilities which were on care and maintenance. We see investments going in to grow capacity in existing facilities. And that was obviously driven by the market, which was driven by demand for cobalt to go into batteries, particularly for EVs.” 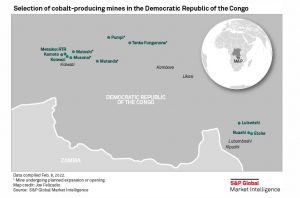 Still under the human rights microscope

But problems persist in the burgeoning industry, even beyond abuses among small-scale cobalt miners laid bare in 2016, according to a report published in late 2021. The 28-month investigation by the U.K. corporate accountability group Rights and Accountability in Development, or RAID, and the legal aid center in Congo known as the Centre d’Aide Juridico-Judiciaire, or CAJJ, found Congolese workers at industrial-scale cobalt mines faced “dire conditions” characterized by low pay, long hours, scant health benefits, degrading treatment and discrimination.

“The situation for workers at these cobalt mines that are feeding our electric vehicle revolution are dire and exploitative,” Anneke Van Woudenberg, executive director of RAID, said in an interview. “It should raise huge questions for EV manufacturers about their supply chains and the responsibility for respecting workers’ rights and human rights within their supply chains.”

Two of the mines investigated by the RAID and CAJJ report are owned by multinational miners undertaking significant cobalt-copper mine expansions: Glencore and China Molybdenum. The companies defended the integrity of their labor practices.

Glencore declined to comment to Market Intelligence, but in a six-page response to the nonprofits, the company outlined its code of conduct and other policies it has in place to ensure responsible practices, free of abuse, at the mine investigated, the Kamoto copper-cobalt mine. In addition, it has received third-party certifications, including the completion of a pilot audit program on supply chain due diligence through the Responsible Minerals Initiative, a group that provides companies with resources to address mineral sourcing issues and improve regulatory compliance.

“All of [Kamoto] employees are paid above the DRC’s minimum wage,” the company said in a Aug. 13, 2021, letter to RAID and CAJJ. They are also given “additional benefits and allowances, including but not limited to medical support, meals, school fees, housing allowance, family allowance, leave of absence payment.” Glencore also said its subcontractors were provided “fair remuneration” in line with DRC law but did not provide guidance on how it determined a “fair” wage.

China Molybdenum responded to the RAID-CAJJ investigation on two separate occasions, saying it was following the conventions of the International Labour Organization, a United Nations agency focused on social and economic justice, along with local labor policies and regulations. The company rejected several of the conclusions found in the RAID-CAJJ report, and initiated an internal review at its Tenke Fungurume mine following the publication. It found the report did “not reflect the actual situation of [Tenke Fungurume] operations,” a spokesperson told Market Intelligence.

Several cobalt buyers believe the large miners’ adherence to international standards allows them to safely buy from Congo. They have been careful to source mined cobalt only from large operators in the DRC, avoiding small-scale artisanal miners to lower their risks.

“Like most of the industry, we are currently sourcing from the DRC,” Trent Mell, CEO and president of Electra Battery Materials Corp., told Market Intelligence by email. “However, Electra Battery Materials will only buy from Glencore PLC and China Molybdenum Co. Ltd. as both companies are large operators that follow [Organisation for Economic Cooperation and Development] guidelines to ensure human rights are maintained in the DRC.” 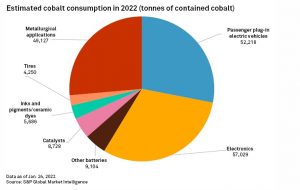 A handful of downstream producers have elected to avoid purchasing cobalt altogether. Some battery manufacturers have removed the cobalt from their batteries, replacing it with iron phosphate. These batteries are lower cost, but they often lack the power and stability of cobalt batteries.

“There’s a lot of talk within the battery industry about moving away from cobalt or reducing cobalt in the battery using chemistries like LFP,” Rawles said. “But fundamentally, there’s still a huge part of the industry and batteries that require cobalt.”

To Charlotte Selvey Miller, head of environmental, social and governance at Benchmark Mineral Intelligence, eliminating cobalt from batteries will likely do little to solve the EV supply chain’s ethical issues. Instead, third-party auditing and the adoption of mandatory standards would help ensure consistency and honesty across miners’ ESG reporting, Selvey Miller said.

“The thing is, you’re always going to have risks somewhere,” Selvey Miller said in an interview. “If you know your risks and if you are engaged with the risks, you can start to mitigate them. But if you start to just move away from them and try and find some other product, you’re going to get new risks and they just might not be known at the moment.”