In 2007 the U.S. Senate designated January 11 as National Day of Human Trafficking Awareness. While never passed in the House of Representatives, advocates have continued to recognize the day. Starting in 2010, President Barack Obama expanded the day, declaring the month of January to be National Slavery and Human Trafficking Prevention Month, culminating in National Freedom Day on February 1. The month was intended to recognize the role we each play in ending all forms of slavery. The designation continued in 2011, 2012, 2013, and 2014. While January 2015 has yet to receive this designation organizations and local governments across the United States are continuing the tradition with months, weeks, conferences, and days devoted to human trafficking awareness.
Many states and organizations are devoting a particular day and event to drawing attention to human trafficking. On January 9, individuals in Chattanooga and Hamilton Counties in Tennessee will “unite and wear white” at exhibits and a program that will feature a keynote speech by Rev. Becca Stevens, founder of an organization that provides recovery and employment opportunities for women coming out of the sex trade. In Michigan, the Benzie County Chamber of Conference will be hosting a speaker from Shared Hope International on January 10. Ohio has declared January 15 to be Human Trafficking Awareness Day, and will be honoring the day with a presentation by Ohio State Representative Teresa Fedor. Events will also be hosted throughout California, including SoCal, San Francisco, and Orange County. 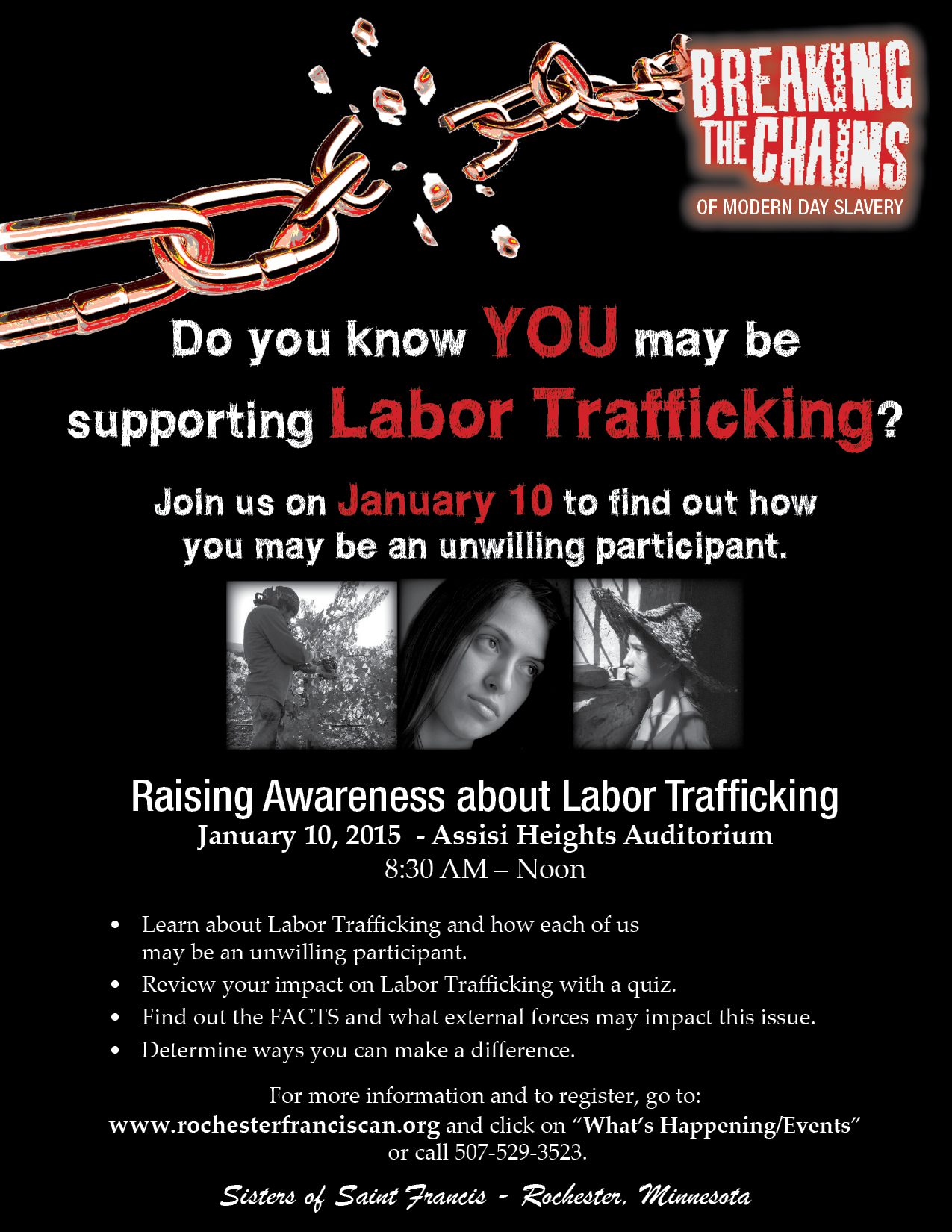 Many organizations and states will be hosting events on the original awareness day, January 11. In Rochester, Minnesota, the Sisters of Saint Francis will hold an event on January 11 devoted to labor trafficking (image above). Chicago will host multiple events on January 11, including screenings of the documentaries on sex trafficking Very Young Girls and DEMAND.

The Tampa Bay area in Florida has declared the week of January 11 through 17 to be Human Trafficking Awareness Week. Southern Oregon will host a month’s worth of events.

Several conferences will also be held throughout the month, including in Kansas, Missouri, and California.

At Human Trafficking Search we will also recognize the month. Both our social media accounts and the HTS blog will be dedicated to forced labor and exploitation in the agricultural sector. As a business sector that relies heavily on migrant workers and is frequently under-regulated, exploitation, including forced labor and trafficking are rampant, both in the United States and abroad. Recognizing that these problems receive less attention than other issues, such as sex trafficking and child trafficking, we’ll be giving the issue a spotlight in a month dedicated to this illicit crime.

Whether you learn more about exploitation in the agricultural sector with us, or whether you attend one of the thousands events across the country, we hope you will recognize the role we each play in ending all forms of slavery.

The Reason for the Late Tax Day this Year
Heart of the Matter: A Film about the Trafficking of Refugees in the European Union
Anti-Trafficking Holiday Shopping Guide 2021
Camel Jockeys in the UAE