This blog post is Part 5 of our Back-to-School Series on Human Trafficking. To read the previous blog, click here.

We are thrilled to feature Tina Frundt, founder of Courtney’s House and a survivor of domestic sex trafficking, on protecting children from human trafficking. Tina is a fearless advocate for sex trafficking survivors, and a strong believer in the importance of parents talking to their children about this issue. 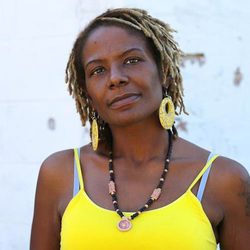 Can you tell me about how you got involved in this work?

Tina: My passion is from being a survivor of child sex trafficking. How I actually got involved in doing the work is first I started off in direct programs in 2004 at Polaris Project and then I started Courtney’s House in 2008 to specifically work with youth, ages 12 through 21 who have been trafficked.

Specifically what kind of work does Courtney’s House do?

T: Courtney’s House really focuses on everything that was not provided for me when I was trafficked. So that really means we focus on the four paradigms of sex trafficking: gang control, pimp control, family control, and boys/transgender. (Of course trafficking happens to boys and well). And so we work with ages 12 through 21, but do not provide housing. We have drop in center services. We also work with parents and have support groups for parents whose children have been trafficking.

How important is it for parents to talk to their children about this issue?

T: It is very important. When you talk about it with your children you should really start at elementary and beyond that. Before elementary we start with good touch and bad touch.

What other things do you think parents should be doing in order to prevent this from happening to their children?

T: I think parents and actually anyone who works with youth don’t understand youth. They don’t use the words that they use and they don’t actually understand what their words mean. So it is a big disconnect when they are talking with them. I feel like you need to understand and listen to the music that they listen to and pull up the lyrics. Because to have a real conversation about this you are going to have to touch on a lot of issues, about touching, sexual assault, and more. All of these issues are going to come up but they may not fully understand because of their surroundings and what they are embedded in on a daily basis.

How have you incorporated this advice into your own life?

T: I have two daughters and they are twenty-three and seventeen. And so with that being said even though I am a survivor of child sex trafficking I raised my kids to know what forced prostitution was, what a pimp was, what a gang member was. With that being said my kids have referred people to me and Courtney’s House. Just from going to their schools and talking to their friends. Because they knew what to stay away from.

Talking is very important. My kids refer people to me and they already know what to stay away from. So you have to raise your children knowing.

So you regularly spoke to them about what these things were?

T: I literally told them what pimps were, what they look like and what they would say. I would actually give them real time information about what it would sound like.

Is there anything parents should specifically be on the look out for? Warning signs?

T: People always want these blanket statements or warning signs, but I think the real warning sign is any time that you don’t understand or even know what your child does on a daily basis. If you don’t know their password to the internet, because the pimp could be in your house right now. How do you know who they’re talking to?

We always say that we want our youth to have privacy and we want to trust them. But I’m going to be really honest and say- we are the parents and we pay the bills! So look at the bill! Look at your phone bill. Look at the GPS and put that on. You are protecting them and you are the parent. You need to know where they are so if something does happen to them then you know.

And that’s what I always tell my kids- “I’m putting the GPS on you, I’m just letting you know I’ll be able to see where you are, so if something happens to you I’ll be able to help you.”

Is there anything else that you think parents should know about this issue?

T: I think that they need to understand that this happens to every racial background and every gender. It doesn’t matter where you live. There can be people manipulating your children online too, telling them that they’re something that they’re not. So it is really important to talk to your kids about what is going on online and get their passwords. You need to be really embedded in their Facebook page so you can see it.

Most of our survivors’ predators or pimps actually contacted them on Facebook and social media, and talked to them right there. Right there in the same household as their parents.

Sarah Pierce is a Research Assistant at the Migration Policy Institute.

Climate Crisis = Human Crisis: At the Crossroads of Climate Change and Human Trafficking
A Slippery Slope for Russia, China and Uzbekistan
The Connection Between Sex Trafficking and Pornography
The Definition of Trafficking: How Abuse Survivors Realize They Have Been Trafficked