Human trafficking, trafficking in persons, and modern-day slavery are umbrella terms – often used interchangeably – that refer to the exploitation of individuals through threat or use of force, coercion, abduction, fraud, and/or deception. These terms also include the practices of forced labor, debt bondage, domestic servitude, forced marriage, sex trafficking, child sex trafficking, and the recruitment and use of child soldiers, among others.

For a precise definition of the term “trafficking in persons,” please see article 3 of the Protocol to Prevent, Suppress and Punish Trafficking in Persons, Especially Women and Children, supplementing the United Nations Convention against Transnational Organized Crime (also known as the Palermo Protocol or the UN TIP Protocol).

Freedom United has developed an interactive map to help supporters identify the most prevalent forms of trafficking in different regions and connect with campaigns to help address them. Click on the image below to use the map on Freedom United’s website. 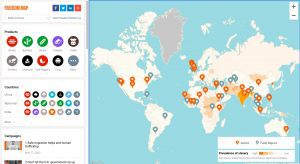 Sex trafficking is when an individual engages in a commercial sex act as a result of force, fraud, or coercion. If the individual is under the age of eighteen, any commercial sex act is considered trafficking even if there is no force, fraud, or coercion.  Sexual exploitation occurs in various settings, including (but not limited to) brothels, strip clubs, massage parlors, on the street (sometimes coined “track”), or in private homes. Individuals can be trafficked domestically and across international borders. According to the ILO, 6.3 million individuals are exploited for sex. Over half of all children in forced labour are in commercial sexual exploitation. Women and children are the most common victims found to be trafficked for sex, but men and boys are also trafficked for sex.  LGBT identifying individuals, especially transgender individuals, have increasingly been found to be victims of sexual exploitation. Accurate numbers for LGBT identifying individuals and for men and boys who have been sex trafficked are hard to find. For the LGBT community there is a lack of focused research. Men and boys who are victims of sex trafficking often do not come forward due to the social and cultural stigmas in most communities around the world.

For More Information on Sex Trafficking:

Forced labor is “all work or service which is exacted from any person under the threat of a penalty and for which the person has not offered himself or herself voluntarily.” Types of forced labor include debt bondage, domestic servitude, forced child labor, and unlawful recruitment and use of child soldiers. The International Labor Organization estimates that 86% of forced labour cases are imposed by private actors – 63 % in the private economy in sectors other than commercial sexual exploitation and 23% in forced commercial sexual exploitation. State-imposed forced labour accounts for the remaining 14 % of people in forced labour. Resources for information on forced labor:

Debt Bondage is a type of forced labor, involving a debt that must be paid off through work.  The Supplementary Convention on the Abolition of Slavery, the Slave Trade, and Institutions and Practices Similar to Slavery defines debt bondage as “the status or condition arising from a pledge by a debtor of his personal services or of those of a person under his control as security for a debt, if the value of those services as reasonably assessed is not applied towards the liquidation of the debt or the length and nature of those services are not respectively limited and defined.”  The ILO estimates that One-fifth of people in forced labour exploitation are in situations of debt bondage. While the global estimates point to the occurrence of debt bondage across all sectors, its relative importance varies considerably from one to another. Debt bondage is most prominent in mining, agriculture, and construction, where 43%, 31%, and 27%, respectively, of all forced labour cases involve debt bondage.  Debt bondage is also known as peonage, debt slavery, or bonded labor.

For more information on debt bondage:

The 2021 ILO estimates are that a total of 3.3 million children are working in forced labour on any given day. Due to the difficulty in obtaining accurate data, these numbers may be just the tip of the iceberg. There are concerns that the COVID-19 pandemic has made the risk of forced labour among children worse. An estimated 10.4 million children lost at least one parent to the pandemic, out of which 7 million have become orphans. This increases their vulnerability to trafficking of every kind.

Children older than the minimum age of work, are considered working in forced child labor if their work is involuntarily and they are under the menace of penalty for not working. If the child is under the minimum age of work, any labor may be considered forced labor. Sometimes children are forced to work on their own, other times their parents are in forced labor and they work alongside them.  Forced child labor occurs in the production of a wide range of sectors and goods, including mining, agriculture, carpets, bricks, cocoa, cotton, rice, and garments.

Involuntary domestic servitude occurs when a domestic worker becomes ensnared in an exploitative situation that he or she is not free to leave. Typically occurring in private homes, the individual is forced to work for little or no pay while confined to the boundaries of their employer’s property. These workers may experience confiscation of travel documents; threats of arrest or deportation; isolation from family or any other type of support network; and subjection to psychological, physical, and sexual abuse.

UNLAWFUL RECRUITMENT & USE OF CHILD SOLDIERS

Children are recruited and used in armed conflict as combatants and in support roles.  When their recruitment or use is a result of forced, fraud, or coercion, then it amounts to trafficking.  The U.S. Trafficking in Persons Report includes a list of countries where the government or government-supported armed groups recruit and use child soldiers.  Afghanistan, Burma, Democratic Republic of the Congo, Iran, Iraq, Mali, Somalia, South Sudan, Sudan, Syria, and Yemen were on the 2019 list.span>

For more information on the unlawful recruitment and use of child soldiers:

Search our multilingual global database for resources and films on all
forms of human trafficking, all over the world.