Minister of Economic Development, Minister of International Trade and Minister of Small Business and Export Promotion Mary Ng speaks during a joint news conference with United States Trade Representative Katherine Tai, not shown, in Ottawa, on May 5.

The United States is pushing its North American economic partners to clamp down on imports of Chinese goods produced by Uyghur slave labour.

In an interview with The Globe and Mail on Friday, Ms. Tai said a lot of the discussions dealt with bilateral tensions and ways to smooth out trade disputes to foster a stronger continental economy. But she said China loomed large in the talks as well, particularly Uyghur forced labour or reliance on Chinese supply chains.

The USMCA has a provision that includes strong labour and environmental protection, including the rejection of goods produced by slave labour.

“It was a very big part of our conversation,” she said. “Forced labour is not a unique problem to trade with China, but it is a significant problem given the treatment of the Uyghur population in Xinjiang and in China in general.” 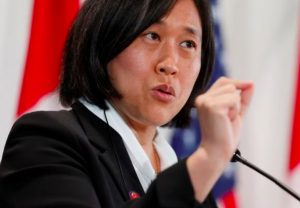 Canada has repeatedly been faulted for failing to do anything to stop imports of goods made with forced labour despite the commitment in the renegotiated NAFTA to do so.

Unlike the U.S., Canada has yet to stop a single such import since mid-2020, when Ottawa amended the Customs Tariff Act to prohibit forced-labour imports.

The Globe has reported that a single shipment of goods impounded by Canadian authorities was later released after the importer successfully challenged the seizure.

By comparison, in the 2021 fiscal year alone, the United States intercepted more than 1,400 shipments of goods made with forced labour from a variety of countries, according to U.S. Customs and Border Protection. The difference in the Canadian and U.S. records on this, critics say, cannot be accounted for solely by the far larger volume of imports into the United States.

The Global Slavery Index, produced by an Australian philanthropic foundation, estimated in a 2018 report that more than $18.5-billion worth of goods imported into Canada are at risk of being made with forced labour at some point in their supply chains, including computers, smartphones, clothing, gold, seafood and sugarcane.

Ms. Tai did not offer any criticism of Canada, and noted that Washington appreciated Ottawa’s support at a G7 meeting last October for a strong a statement on forced labour. Canada also backed a recent resolution at the World Trade Organization to crack down on subsidies to the fishing industry that involve compulsory labour, she said.

At the Vancouver meeting, Canada and the U.S. concluded an agreement in which the United States will lift tariffs on solar panels produced in Canada. The deal means that Ottawa cannot allow solar panels from China that are produced with forced labour to go into the U.S. market. This is similar to a Canada-U.S. agreement to stop China from dumping steel or aluminum in this country for export south of the border.

“We are only providing access to Canadian-originated solar panels … and both sides have a commitment to ensure that it does not become a back door for unfairly produced and unfairly traded solar panels from other places, but especially from China, which produces 85 per cent of the world’s panels,” Ms. Tai said.

The U.S. trade representative said the pandemic and problems with supply chains from China in particular have led to a resurgence of business investment in North America.

Ms. Tai said globalization has helped grow the “economic pie” through efficiencies, but it has become apparent that there are downsides, pointing to Russia’s dominance of the natural gas market in Europe, and supply problems with China.