Telford child sex abuse survivor: There was a stream of men

Emily gave evidence to the inquiry, but said she would not cooperate again

A survivor of child sex abuse has spoken of how she was taken to flats and visited “by a stream of men”.

Emily Vaughn spoke to an inquiry about abuse in Telford, Shropshire, which concluded evidence of the crimes was ignored by authorities for generations.

Its report said more than 1,000 girls were abused and a lack of police action had “emboldened” the perpetrators.

She questioned whether the report would change anything, but West Mercia Police says improvements have been made.

Ms Vaughn, not her real name and who is now in her mid-30s, said her grooming had started when she was 11.

By the age of 14 or 15 she was introduced to older men and it progressed into sexual abuse. She and others were trafficked from her home in Wales across the country, including to Telford.

“We were taken to these flats,” she said.

“I remember everything was green, it was so old fashioned and there were no carpets or anything.

“One room had mattresses on the floor, the other room had two beds put together.

“I don’t know if it was the same ones, but it was constant.” 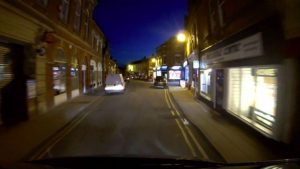 Emily says she was trafficked to Telford for sex

The abuse continued until she was 20 when, she said, she had got “too old” and had been more aware of what was going on.

When the inquiry was set up, she said she had agreed to speak to it over the phone. She felt she was not being taken seriously and that it was rushed.

She does not want to read the final report and said she would not co-operate with another inquiry.

“I don’t want to know what is in it, because I’m not from Telford; I was trafficked to Telford, it is just another place, it is nothing to me,” she said.

Although she said she had been told there would be support in place, it had not been offered to her.

No-one has been convicted over the abuse she suffered.

The independent inquiry, commissioned by Telford & Wrekin Council in 2018, said it could not comment on individual witnesses.

But it said an independent and confidential support service had been set up to help anyone who gave evidence to the inquiry and it had been available throughout the inquiry.

There had been reminders about the support before and after people’s interviews, but witnesses had to refer themselves, it added.

Speaking to BBC Radio Shropshire, inquiry chairman Tom Crowther described how the abuse has had an “unquantifiable” impact on the survivors

“Anybody looking at what these children went through, meeting the adults they now are and hearing about their lives and how they have been changed couldn’t fail to be moved, appalled, outraged by it, it is dreadful, utterly dreadful,” he said.

“The recommendations I hope are general enough that other local authorities could think about whether they need to implement them as well so children like Emily would then I hope have a sympathetic response from their own agencies and could go to them and make complaint,” he said.

“That is what I am hoping will happen in this case that we set a model for good practice that spreads regionally and perhaps further than that.”

West Mercia Police has apologised “unequivocally” for past events as has Telford & Wrekin Council.

Police said the force now had teams dedicated to preventing and tackling child exploitation and worked better together with organisations to safeguard children.

The council said it was working to provide support for victims and was already carrying out many of the inquiry’s recommendations.

A Thorn in the Heart: Cambodian Men who Buy Sex
Protecting Children from Online Sexual Exploitation: A Guide for Religious Leaders and Communities
Launch Event for the International Year for the Elimination of Child Labor
Human smuggling in Africa. Rethinking responses.