How Is Your Phone Powered? Problematically.

Despite big companies’ pledges to crack down on exploitative practices, much cobalt mining remains unsafe and unregulated.Credit…Ashley Gilbertson for The New York Times

Siddharth Kara’s “Cobalt Red” takes a deep dive into the horrors of mining the valuable mineral — and the many who benefit from others’ suffering.

Cobalt, a mineral essential to the batteries of smart devices and electric vehicles — and therefore to the future — is haunted by a past of slavery and colonialism. The phone in your hand contains several grams of this element; some of it, as Siddharth Kara shows in “Cobalt Red,” was likely mined by people hacking away in toxic pits for subsistence wages.

Used as a source of blue pigment since antiquity, cobalt has joined blood diamonds and forced-labor shrimp as the latest bête noire of critics of globalization. Nearly half of the world’s reserves are found in the Democratic Republic of Congo, a conflict-stricken country that has long been the site of a geopolitical scramble for strategic resources. Human rights abuses and child labor are rife in Congo’s mining sector; in 2016, Amnesty International and the watchdog group Afrewatch put out a report that tied companies like Apple and Samsung to exploitatively mined cobalt. The industry promised reforms, but since then the demand for cobalt has only grown. Kara sets out to investigate what, if anything, has changed.

A lecturer at Harvard’s Kennedy School, Kara has written on sex trafficking and other forms of so-called modern slavery, part of a new group of abolitionists who claim explicit parallels with the historical fight against the slave trade. Like his previous books, “Cobalt Red” takes the form of a righteous quest to expose injustice through a series of vignettes of exploitation and misery. Kara proposes to take us “down the only road that leads to the truth,” a journey into the Katanga mining region, toward the cobalt hub of Kolwezi, “the new heart of darkness.”

Ever since its seizure by the Belgian king Leopold II in 1885, the Congo River and its watershed have supplied the world — not least the United States — with riches: ivory, rubber, palm oil, diamonds, uranium. Yet today more than three-fourths of Congo’s population live below the poverty line, while few have access to clean drinking water, and even fewer to electricity. “Never have people of the Congo benefited from the mines of Congo,” a community leader tells him. “We only become poorer.”

The mineral-rich Katanga region’s mining towns were constructed by the Belgian colonial monopoly, which drew labor from across the country. After Congo gained independence in 1960, Belgium, seeking to undermine its former colony’s anti-imperialist prime minister, Patrice Lumumba, supported a separatist rebellion in Katanga. 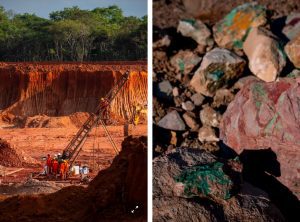 After Lumumba was deposed by the C.I.A.-backed Mobutu Sese Seko, he was arrested and flown to Katanga, then tortured and murdered under the supervision of Belgian officers. Mobutu would preside over a despotic 30-year kleptocracy that saw the Congolese standard of living fall dramatically. In the ’90s, Gécamines, the state-owned successor to the Belgian monopoly which provided housing and fixed wages to its miners, collapsed, leaving behind the unemployed who would turn to informal, or artisanal, mining, seeking the mineral deposits that lie in the hills all around.

Fear of Communism had ensured Western support for Mobutu; today, the U.S. conflict with China hangs over Congolese politics, with the current president, Félix Tshisekedi, promising to review many of the lucrative concessions granted to Chinese companies by his predecessor. Chinese companies produce three-quarters of the world’s refined cobalt, crucial to their dominance of the electric battery industry. Around two-thirds of their supply is excavated and processed with heavy machinery in industrial mines, seen as relatively untainted by forced and child labor; but the remainder is dug up by artisanal miners, who can often produce a much higher grade of ore. Because cobalt deposits sometimes lie close to the surface — “like raisins in a cake,” Kara writes — this ore can be mined with simple tools; in other places, locals sift through piles of industrial tailings.

Beginning in 2018, Kara made several trips to Congo’s mining provinces, scrambling around treacherous sites and negotiating access with the militias who guard them. Here the miners toiled in open pits and tunnels; some, like the Shabara mine, were enormous: “More than 15,000 men and teenage boys were hammering, shoveling and shouting inside the crater, with scarcely room to move or breathe.”

The miners, most wearing no protective gear, labor amid toxic metals. Kara interviews some who were disabled for life in accidents, and witnesses the corpse of a teenage boy being lifted out of a collapsed tunnel that killed 63.

Many of Kara’s interviews are carried out under the gaze of armed guards and, although he describes in sharp detail the poverty and hazards faced by the miners, the limitations of his method are evident in places where the locals are flattened into brief figures of suffering, “balls of dust” in towns where, “other than the very young, no one smiles.” But the strength of the book lies in how Kara, a former investment banker, analyzes the exploitation that extracts value from the miners’ labor, then launders their tainted product into the global supply chain.

Artisanal cobalt is bought on-site from the miners by roving traders, some former miners who’ve amassed enough capital to pay for a motorcycle or pickup, along with the bribes and permits necessary to pass through checkpoints. The traders bring the ore to depots known as maisons d’achat, “small shacks that advertise with telltale pink tarps and painted names such as $1,000,000 Depot.” Although these are supposed to belong only to Congolese nationals, those Kara visits are operated almost exclusively by Chinese agents. At every step, laws and regulations are circumvented through bribery, while men with guns keep the miners in their place. The depots sell the artisanal ore to processing facilities, where it blends indistinguishably with industrially mined cobalt, and so, Kara writes, “there is no such thing as a clean supply chain of cobalt from the Congo.”

Reforms of “transparency and traceability” touted by the industry are revealed to be “fiction.” Kara investigates a model mining site launched with help from a U.S.-based NGO that reportedly received millions from Western technology companies. A barrier keeping away child laborers turns out to be a spindly wire fence; specially tagged bags of ore are mixed with those of unknown origin at the processing facility. As for the NGO staff, they “never come here.”

The fervor of Kara’s abolitionism contrasts with his proposal for reform, which prioritizes “accountability” from those who profit from the miners’ labor. How likely are technology companies like Apple or Google to treat the miners “as equal employees to the people who work at corporate headquarters,” when they employ armies of disposable contract labor here in the United States?

Regardless of its moral equivalence with historical slavery, today’s extreme labor exploitation is rooted in our modern economy. Consider the globalization of capital and the pressure exerted on supply chains to cut costs; the collapse of social-welfare and state-run enterprises like Gécamines; the shift to precarious, informal work; the illegalization of migration. The miners’ exploitation is a symptom, not a cause, of their powerlessness, one element of a worldwide system of extreme inequality from which others benefit. Returning from his travels, Kara sees Western prosperity with new eyes. “The world back home no longer makes sense,” he writes. “Clean air and water feel like a crime.”